Cultrface is a blog about culture and how it can enrich our lives.

When I was looking for a way to make a photo book out of some of my photos, I came across BlookUp. The project, created by Philippe Bruno, allows you to upload your tweets, blog posts, Facebook posts, or even Tumblr posts and create books for anyone who wants them.

This can work for people or companies who pride themselves on their social media presence or want to reset online but keep some of their favourite thoughts and memories in physical form. The main reason I wanted to make my own photobook was because Sean Brown did the same with his book, In No Particular Order (available at the Curves Shop and Selfridges if you’re in the UK). The ethos behind it was this: “don’t delete your old work”. Services like BlookUp help you from throwing that work in the digital trash.

I love Five Guys* but when I need to stop my bank account from gently weeping, I like to make my own (as best I can). That’s why I was excited for Babish’s video about making steakhouse burgers.

Babish made his own buns for this episode—not for me but go off, king—and picked 7 cuts of beef to see which one made the best burger:

In the end, he settled on ribeye and it looks nice and juicy at the end. If you’d like to see Babish make a Smashburger, check out the video as he goes into more depth about each cut of beef he used.

Burger related: How to make a smashburger (by J. Kenji López-Alt)

Awaken the force in the down dog position with Cosmic Kids Yoga’s Star Wars-themed yoga workout. Jokes aside, this makes thematic sense given Star Wars’ ties to spiritualism and qi but it was unexpected to see on YouTube, especially because it’s targeted at children. I bet my son would enjoy this.

It’s great to see Michael Keaton in more things these days and that’s a major part of why I’m looking forward to watching Dopesick. Based on the book Dopesick: Dealers, Doctors and the Drug Company that Addicted America by Beth Macy, the 8-episode series focuses on “the epicenter of America’s struggle with Opioid addiction”.

Keaton stars as Dr. Samuel Finnix, a well-liked doctor in a Virginia mining town who becomes a pusher for a pharmaceutical salesman who sells him OxyContin. Finnix begins to prescribe the drug with devastating effects and finds himself fighting to reclaim his integrity and the lives of his patients.

Indigo is the penultimate colour of the rainbow and it is etymologically tied to India, demonstrating how far its origins go way back as Rohini Kejriwal discovered for Hyperallergic.

While indigo’s etymology identifies it as a “product of India,” it has a long history of being grown and used around the world for over four millennia and was further globalized as major 18th-century indigo plantations were founded by colonial powers in both India and the American South. For this show, [Bhasha] Chakrabarti sourced indigo from various parts of the world — from India to Nigeria to Guatemala — after interacting with farmers, dyers, and traders in cities with ancient traditions of indigo dyeing. She maps these overlapping cartographies of trade, imperialism, and resistance in her work and traces the presence of indigo in conceptions of divinity, agricultural and textile histories, and musical traditions. For example, she layers the lyrics of Blues songs with Bengali protest songs about the “tyranny of blue,” sung by indigo plantation laborers.

I don’t hear enough about indigo. It’s a beautiful and underrated colour. There are three birds that are indigo in colour (and/or name):

Lactarius indigo, aka the indigo milk cap or blue milk mushroom, is a type of fungus with an indigo underbelly. And denim jeans got their blue colour originally from indigo dye. Go read Rohini’s essay and then check out indigo’s Wikipedia page.

For gal-dem, Lauren Dei spoke to the artists behind a new exhibition called ‘We Are History‘. The show, curated by Ekow Eshun, displays art that tells the stories of colonialism and its pivotal role in global warming and the harsh realities of climate change.

“We have a saying in Barbados charting the timeline of hurricane season,” Alberta tells gal-dem via phone call.“‘June – too soon, July – stand by, August – come it must, September – remember, October – all over.’ In 2021, the hurricane season began in April. Climate colonialism means the hurricane seasons are growing longer and longer, leaving the country on tenterhooks for over half the calendar year.”

An early scene in the film shows the aftermath of Hurricane Dorian in 2019. The camera pans above the wreckage of the decimated Bahama Islands. An estimated 13,000 homes were severely damaged or lost during the Category five storm that left the national airport underwater and saw over 6,000 evacuees rescued by air.

Head over to Somerset House to see We Are History, which runs until 6th February 2022.

It’s no longer with us but the spaceship McDonald’s, just off the A1 in Alconbury (UK), was an icon in the 90s. But it wasn’t always a Maccy D’s. The building opened in 1990 and traded as a Megatron, a space-age restaurant (below), but 3 years later, it transformed into a McDonald’s.

According to a former worker at the McDonald’s restaurant, the building had computer systems that allowed you to order at your table, predating the ordering kiosks by a couple of decades. However, due to echoey walls, poor lighting, and rising maintenance costs, the spaceship closed in 2000 and was demolished in 2008.

If you love abandoned buildings like I do, check out some of photos via Comfortable Disorientation and a camcorder still from 1993 (from the video at the top).

A group of men were arrested at Indira Gandhi International (IGI) airport when customs officials found 4kg of gold stashed in their… rectums.

Acting on intelligence, the accused were intercepted on Friday after their arrival at the airport in two different flights from Manipur’s Imphal.

When life gives you lemons and all that.

Who knew Mountain Dew was so versatile. I blogged about Mountain Dew cheesecake last September and a few months ago, I found a recipe list for 140 Mountain Dew drinks. They’re mostly alcoholic drinks—cocktails, punches, and shooters—but there are a few non-alcoholic ones in there. Names include:

As ever, drink responsibly and keep some water at your bedside because the hangover will be REAL after some of these. There’s always İşkembe Çorbası if you’re desperate.

Cocktail related: How to make Jamaican rum punch with Wray and Nephew, the mint julep and the Black bartenders who popularised it, and try a glass of panther milk. 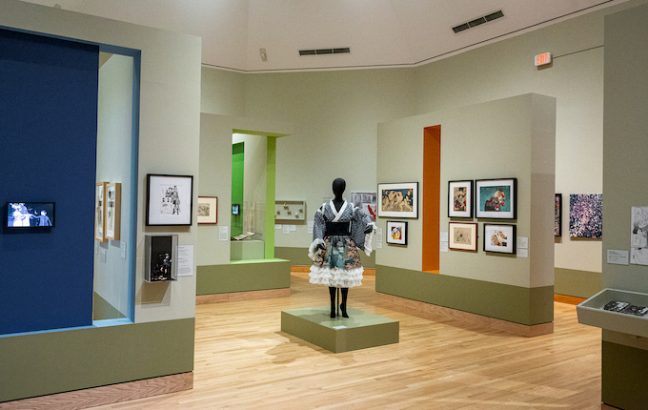 Lord knows we (the West) have a lot to thank Japan for in terms of pop culture and a new exhibit called ‘Repro Japan: Technologies of Popular Visual Culture‘ pays tribute to that influence. The exhibit is running at the Williams College Museum of Art (WCMA) until 20th March 2022 and features an array of visual artefacts, from woodblock prints to anime cels.

This from Yuchan Kim, writing for The Williams Record:

The first thing I noticed walking into the exhibition is that Repro Japan feels like pieces of Japanese culture stitched together. It’s not organized by timeline, region, or style as you would expect at other exhibitions that survey a particular country’s culture. The two galleries are instead organized by rough groupings of mediums, ranging from textiles and woodblock prints to manga, 3D prints, and cosplay costumes and performances.

As Kim said in his conclusion, it’s not a cohesive, all-rounded representation of Japanese visual culture (it’s in Massachusetts after all). But you’ve got to start somewhere and if it’s safe to do so and you’re in the area, go check it out.

Instagram, for all its many faults, is a great place for nostalgia. I’ve featured a few of those accounts on this site and I’m here to add a new one: @itscanclub.

The account features mostly food packaging from the 80s and 90s and the odd carrier bag, old phonecard, and map. Anyone who grew up in the UK will get hit in the feels looking through this retro treasure trove and, given how the present and future are looking, it might offer some comfort to reminisce about the good times (if they were available back then). My personal favourites are the chocolate wrappers.

William Mullan has an Instagram account called @pomme_queen. It’s dedicated to unique apple variants and flowers and this year, he put wrote “Odd Apples“, a book about those unorthodox cultivars.

Where does this fascination come from? Apparently, it began during childhood when Mullan discovered the Egremont-Russet apple variety. But it wasn’t until years later, during a trip to a farmer’s market in New York, that Mullan decided to explore the subject artistically. There, he bit into a Pink Pearl for the first time, and the taste gave him such an experience that from then on, he began to photograph apples in an “extraordinary way”.

Of all the apples on show, my favourite is the Black Oxford (top right) because it reminds me of the Galaxy frog which I’ll hopefully cover on this site in the future. It looks so… celestial.

If you’re familiar with kintsugi, you’ll know how it finds beauty in the broken. Yeesookyung’s kintsugi sculptures, however, try to turn broken chaos into a sense of ceramic order.

Since it’s Halloween and the last day of “Spooky Month”, I thought I’d put together a list of Halloween/horror related links for you to enjoy.

Enjoy your nights, stay safe, and happy trick or treating!

More on rum and cocktails: a very brief history of Jamaican rum, the mint julep and the Black bartenders who popularised it, and Equiano, the world’s first African-Caribbean rum