If you’re looking for a different kind of hot chocolate, try this spiced hot chocolate recipe. Follow the link for how to make it but check the ingredients below (which I’m sure you can substitute for dairy-free alternatives where applicable)

And for another type of chocolate drink with added spice (cinnamon in this case), try a cup of cocoa tea.

Most people agree that Los Angeles looks like a boring place. Every high school has a perfect 12 stair handrail and everything is manufactured and inauthentic.

But Satan’s Drano, the only skate hot sauce brand, might change that. Their creator Bob LaSalle just released their first “Lifestyle and Action Sports Video” with the perfect amount of guitar solos, skating into walls, and Mark Gonzales clickbait. This video makes LA look less like a casting call for the new Jonah Hill film and more like a place someone would actually want to be.

(via Jenkem, where you can read a full interview with Bob LaSalle)

Folks eating spicy food and losing their entire shit will always make me laugh until I can’t breathe. While I’d never do any kind of hot pepper challenges, I guess that lack of oxygen is something we all share. Music producer Chris Punsalan sacrificed his body, mind, and soul for the pursuit of Hot Ones happiness when he tried the challenge with his cousins, Merz and Jerm. But he wasn’t just going to eat hot wings and leave it there. No, he was going to make a beat at the same time.

Watch as he eases his way through the first few wings until that “kick at the end” became roundhouses to the throat and torso. Oh, and of course, no acidic drinks were at hand—just a rookie bottle of water. But seriously, props to Chris for surviving. I know I couldn’t have done it.

In 2016, YouTuber Lizzy Wurst posted a video called WORLDS HOTTEST PEPPER CHALLENGE (GONE WRONG) – CAROLINA REAPER PEPPER – 2.2 MILLION SCOVILLE UNITS. It has over 20m views at the time of writing and features Lizzy with her friend Sabrina trying the Carolina Reaper challenge (related to but not the same as the One Chip Challenge that ProZD and LGR did.

The original video is around 4 minutes long as shows the natural and devastating effects of the pepper as it destroys both challengers, particularly Sabrina who did not cope well. But it’s the edited version that I saw first and the cuts make it even funnier.

Let’s do a quick analysis:

I can’t feel sympathy for anyone who knowingly takes this challenge on and suffers the consequences. As my mother would say, ‘if you cannot hear, you must feel’. 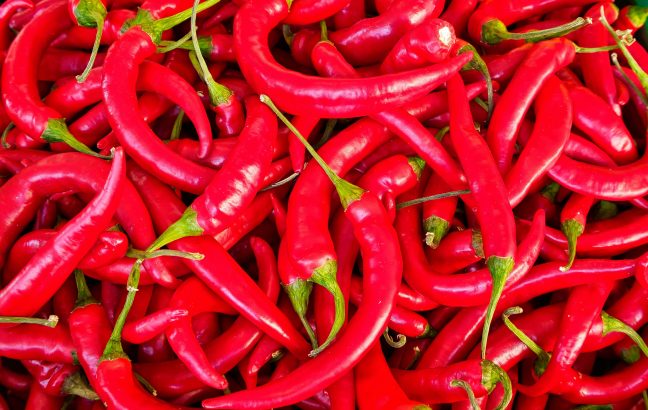 Matthew Wills wrote a great piece on the long, wonderful history of the chili pepper. Straight off the bat, we get educated on something most people associate with chilis—hotness:

Not all chilis are hot. Some are mildly sweet, others comfortably warming. Used in widely different cuisines on every continent, chilis originated in the Western Hemisphere. “Chili” itself comes from a Nahuatl word.

But I prefer the hot ones. In small quantities, not super hot, and preferably in flake form. I also enjoy videos of people eating chilis such as AyyOnline and this classic.

Oh, and for anyone who wonders why water doesn’t help when you’ve eaten a chili: it’s because the water spreads the capsaicin (the alkaline chemical that produces the burning sensation) across your mouth. Therefore you need an acid to neutralise it; drinks like milk (which contains lactic acid) and any citrus juice will help. 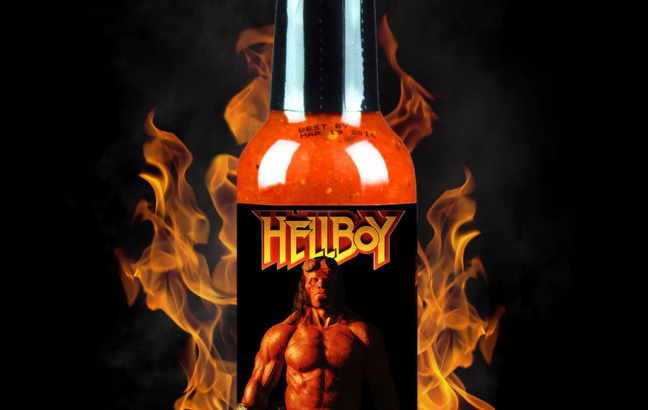 Fancy a taste of hell? Then you should try Hellboy Right Hand of Doom hot sauce from Armadillo Pepper.

According to the site, the hot sauce was officially licenced for the 2019 remake of Hellboy and sizzles at 6.66 million Scoville Heat Units. This is thanks to a demonic blend of Trinidad Scorpion Butch T peppers and red Habanero peppers.

However, Right Hand of Doom is not cheap, coming in at $18.99. But if you’ve got the money burning a wallet, use it to buy some sauce that can burn a hole in your stomach lining.

For more hot sauce extravagance, check out Gabrielle Union on Hot Ones, the world’s hottest gummy bear, and the funniest chili pepper challenge I’ve ever seen. One of my favourite internet things is watching people eat hot food. Whether it’s the hottest wings on the planet on Hot Ones or munching on a Naga chili. I wrote about ProZD (real name SungWon Cho) trying the One Chip Challenge and now it’s the turn of retro computer extraordinaire, LGR. But for this, he took the challenge for his LGR Foods channel which you should check out as well.

For those who don’t know, the One Chip Challenge involves a single tortilla chip made by Paqui, coated in a deathly black jacket of dust, and you have to eat it. That’s the challenge – handle the heat and you’re a chili champ. The heat comes from Carolina Reaper pepper, formerly the hottest pepper in the world. Participants include Kristen Bell, Michael Peña and almost everyone with a YouTube channel and a few hundred thousand followers.

In LGR’s case, someone sent him the chip and the results were just as I expected. The smell is demonic and the taste is pure unadulterated heat. But it doesn’t hit you straight away and LGR found that out as time progressed. 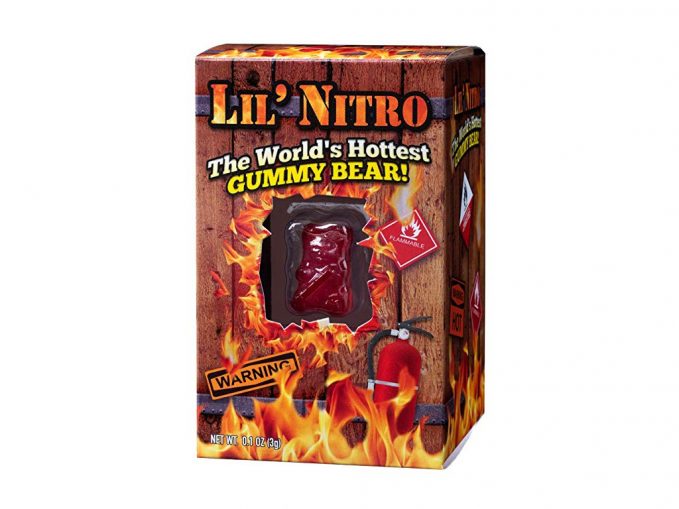 So how hot is the world’s hottest gummy bear?

Made and sold in the USA, Lil’ Nitro measures 9,000,000 on the Scoville scale, a scale used to measure the heat of chilli peppers. Put into context, that’s 900 times hotter than a jalapeño and over 5 times hotter than a Carolina Reaper. It comes with a “cool shield foil wrap” and an ice pack to ease the pain (because you’ll need it).

If you can handle the heat, you’ll be disappointed to hear there’s only one Lil’ Nitro Gummy Bear available per box but I can’t imagine there’s much demand for a packet of gummies with 9 million Scoville rating.

Lil’ Nitro is a next-level spice challenge that shows that even the sweetest things can be corrupted.

Grab a Lil’ Nitro Gummy Bear on Amazon and let us know in the comments how it tastes. If you’re still alive. There’s only one thing better than a spicy food challenge: watching people’s reactions after they eat it. My all-time favourite remains AyyOnline when he ate the “ghost pepper”, followed by the two white girls who nearly died doing the same thing. But SungWon Cho – known online as ProZD – took the one chip challenge without any of the drama. And his wife, Anne Marie, joined him.

“The problem with it is it tastes real bad.”

Stream it below to see just how bad it tasted.