The Islamic Tartan Concept weaves together the different strands of Scottish and Muslim heritage creating the fabric of the future.

The theological explanation of the design is as follows:

The folks at Grammarphobia were asked this question and this was the opening excerpt from their response (click the link in the title for the full version):

When the word showed up in Middle English in the 14th century, “damn” was a verb meaning to condemn. It wasn’t until the 16th century that “damn” was used profanely.

English borrowed the term from Old French, but the ultimate source is the classical Latin damnāre or dampnāre, meaning to damage or condemn. (In fact, “condemn” ultimately comes from the same Latin source as “damn.”)

In Middle English, according to Oxford English Dictionary citations, “damn” had three related meanings: (1) to doom to eternal punishment; (2) to pronounce a sentence; (3) to denounce or deplore.

See also: The origins of the “black sheep”

Warning: this post contains spoilers. I know the film is nearly 30 years old but I’m a conscientious kinda guy.

2nd February is Groundhog Day, a North American tradition derived where a groundhog named Punxsutawney Phil comes out of its burrow and declares the season for the next six weeks:

By the way, Punxsutawney Phil has predicted 6 more weeks of winter this year.

If you’re wondering how accurate Punxsutawney Phil is, here’s what Live Science says:

Not very, it turns out […] According to the Groundhog Club’s records, the various incarnations of Punxsutawney Phil have predicted 103 forecasts of more winter and 20 early springs (including this year). (There are nine years without any records, and even the Punxsutawney Area Chamber of Commerce, which keeps track of these things, doesn’t know what happened to Phil during those years.) Data from the Stormfax Almanac’s data shows that Phil’s six-week prognostications have been correct about 39 percent of the time.

But when most people talk about Groundhog Day, they’re referencing the film starring Bill Murray and Andie McDowell. In it, Phil Connors (Murray) is a weatherman who visits Punxsutawney for the Groundhog Day festivities only to find himself trapped in the town—and the same day—reliving it over and over.

It’s a brilliant film and its cultural impact has travelled as far as Tibet and the Buddhist monks who live there. I’ve seen it many times but decided to watch it today since it’s 2nd February after all. Rather than write a film review (I’ve given up review writing and I’m no Roger Ebert), here are some of my napkin thoughts as I watched it through today:

(Image courtesy of Eddie~S on Flickr; shared using the CC BY 2.0 licence) 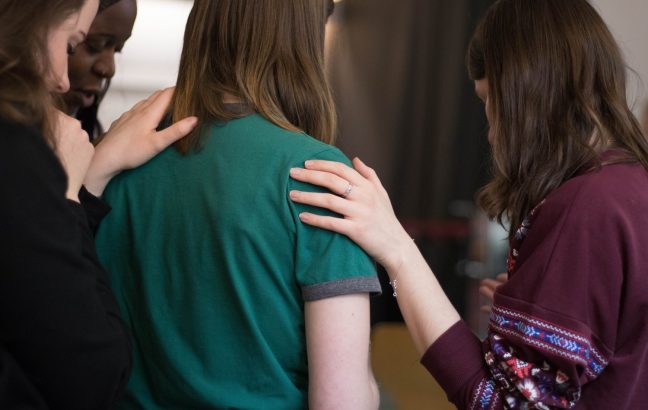 To paraphrase Ross Geller, congresspeople say all kinds of… stuff.

May the Lord lift up the light of his countenance upon us and give us peace,” Cleaver said during his two-minute invocation, “peace in our families, peace across this land, and dare I ask, o Lord, peace even in this chamber.

We ask it in the name of the monotheistic God, Brahma, and ‘God’ known by many names by many different faiths. Amen and awoman.

I’m no stranger to this kind of gendered prayer; the God interlude from OutKast’s Speakerboxx/The Love Below uses a similar variation:

But that was in jest. Cleaver meant what he said. Victor Mair from Language Log dissected the utterance, with etymologies of the word “amen” and, for those who didn’t know, it isn’t connected to the word “man” in any way.

Old English, from Late Latin amen, from Ecclesiastical Greek amen, from Hebrew amen “truth,” used adverbially as an expression of agreement (as in Deuteronomy xxvii.26, I Kings i.36), from Semitic root a-m-n “to be trustworthy, confirm, support.”

There’s something to be said about the trustworthiness, confirmation, support of men but that’s for another day. Needless to say, you don’t need to feminise the word “amen” but what Congress should do is make women’s lives better—especially women of colour—with better legislation for their rights and their bodies. Herbie Hancock is one of my all-time favourite jazz musicians, loitering around 2nd or 3rd place with Bill Evans but behind Miles Davis. His music has transcended more eras and genres than I can count on both hands but he has always remained true to his art and his being.

In a Harvard University lecture at Mahindra Humanities Center in 2014, he discussed his Buddhist beliefs and how they contributed to his life’s work:

Buddhism doesn’t write the notes for me but it absolutely and positively affects how I look at everything. Buddhism is uncovering and leading a creative life and, in the process, establishing your own story, A common viewpoint holds that one’s destiny is predetermined by external forces. However, the practice of Buddhism can break through that notion and carve out the kind of life where you’re the author of your book and not the co-author or a character in someone else’s story.

This is the 5th lecture from a series which you can watch on YouTube and I recommend that you do.

The codex set the standard for future book formats that live in on modern times. Some are peculiar, like Codex Seraphinianus, but Codex Argenteus is the bible of Gothic Germany.

What is Codex Argenteus?

Codex Argenteus is a 6th-century book containing a Gothic translation of the Bible from the 4th century. To be clear, I’m not talking about the modern gothic subculture. The Goths were an East Germanic people who helped bring down the Western Roman Empire.

But back to the book. Codex Argenteus preserved the Gothic language in the best way possible – via a translation of the most famous text in human history. Its creation started in Ravenna, Italy. The city was the capital of the Western Roman Empire at the time and King Theoderic the Great wanted to make it a metropolis. Ravenna became the capital of the Ostrogothic Kingdom after the Empire’s demise; a Bible translated into the kingdom’s language seemed fitting.

A bishop called Ulfilas (or Wulfila as he was known in Gothic) was originally attributed as the sole translator. But we now know Codex Argenteus was translated by multiple scholars supervised by the bishop. Ulfilas was a Goth and developed the Gothic alphabet, loosely based on an amalgamated Greco-Runic alphabet.

The empire fell in 476 and Theoderic died in 526. The Codex disappeared with him and stayed that way for centuries. It was then found in the 16th century on a library shelf in Werden, Germany. Occult-obsessed Rudolf II began collecting books for his court in Prague and select “Argenteus” as one of them.

The Silver Bible travels to Sweden

It stayed there for about 70 years before Sweden invaded Prague and took the Silver Bible with it. Codex Argenteus then became a part of Queen Christina’s library. But a few years later, Queen Christina converted to Catholicism and left for Rome after abdicating her throne. Her librarian went with her and she paid him in books as she didn’t have any money. The Gothic Bible changed hands once more.

But did it stay in the possession of the Swedish royal family for good? Of course not. In 1995, it was stolen by two men in gas masks. Authorities recovered Codex Argenteus a month later but the thieves were never caught. It now resides in an annexe to Carolina Rediviva, Uppsala University’s main library. And a bulletproof glass box protects it this time.

Unfortunately, today only 56% of its original 336 pages remain. They were also dyed purple – talk about regal. It was expensive to do this in the 6th century, exclusively for emperors. Codex Argenteus is a well-travelled book and an enduring bastion of a lost language.

Wulfila didn’t want the Gothic language to stay within the confines of Codex Argenteus. He wanted to spread the text and keep the language alive that way. And now anyone can read the book.

David Landau helped put the 1927 edition of the Codex online and you can read it via alvin-portal.org.