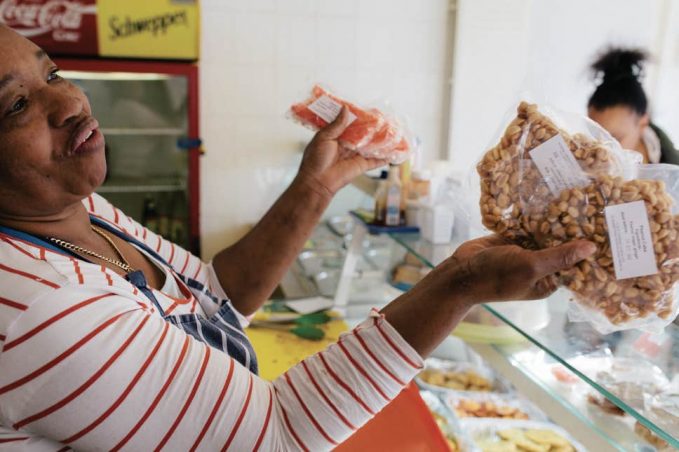 I love my West Indian heritage. Whenever I can, I claim it above being British as I feel more at home amongst family and my kinfolk. A part of that comes from the Jamaican cuisine and having to buy ingredients for certain dishes.

As a teenager, I’d have to go out to various ethnic shops (often South Asian-owned) but I also went to West Indian shops that stocked all the things my mum needed. I didn’t always enjoy doing it (who wants to run errands while you’re in the middle of playing video games?). But as I got older, it was nice to go for a walk and immerse myself in the culture.

So, here are 5 things my mum made me buy from West Indian shops.

Jamaican bread (or hard dough bread to everyone outside my family)

I didn’t know it was generally known as hard dough bread until my late teens. I always knew it as Jamaican bread and that’s what I call it to this day. It’s the best bread on the planet as far as I’m concerned. It’s thick, sweet, and demands a slab of butter on it by default.

In terms of size and shape, I started out buying the square-shaped loaves but as time passed, we moved onto the rounder loaves. It was a better choice. You got more bread for your money that way. Who cares if it’s misshapen? This ain’t Bake Off.

There is no better bun out there. The Jamaican spiced bun is often eaten during Easter and that’s when I usually got it but the tradition extended to Christmas because why not?!

For anyone who hasn’t experienced this Jamaican delicacy, the bun is often round and dark brown, filled with currants or raisins and goes hand in hand with cheese (although I eat it with butter mostly). And a glass of milk to wash it all down. I’m sure the vegan alternatives would go superbly with it as well.

This often shocks people but I don’t like coconut. The taste makes me wretch, particularly if it’s desiccated coconut. Not a fan of the water. But the cream and the milk is fine in food… if the flavour isn’t prominent.

That’s how I managed to eat rice and peas with coconut cream in it for so many years. It was a Sunday staple and I’d regularly buy the boxed form from KTC.

It’s strange that I can’t handle spicy food and yet I’ve written about ghost peppers and hot gummy bears. I live for the intrigue I guess.

My mum couldn’t eat her food without Encona. Had to be that brand. Recently, she’d been “slumming it” with Tabasco as they didn’t sell Encona where she lived. When I visited earlier this month, I brought two bottles of Encona for her. She was happy.

The pepper used in the sauce is the Scotch bonnet, which is more than 10x hotter than the hottest jalapeño. It’s no ghost pepper but it’s fire for anyone who can’t handle heat like me. You’ll definitely need another glass of milk for this one.

This wasn’t a regular purchase but still one I made. Some may know them as guineos in Latin America, Puerto Rico, and the Dominican Republic and they’re basically unripened bananas. My mum would boil them and we’d eat them with dumplings (often boiled too but occasionally fried) and yam (we’ll get to that one later).

Not my favourite savoury food as it didn’t taste of anything so that’s when the gravy came in, to add some flavour.

Some of these weren’t exclusively purchased at West Indian shops but they were things I bought on my travels and remind me of my black heritage.

There was an art to buying the right yam. My mum did it most of the time but on the occasions I did, the pieces had to be clean-ish, big-ish, and cheap-ish.

Much like green bananas, I wasn’t a fan (in fact, I hated them as a kid). But my tastes matured and a bit of gravy went a long way.

The Caribbean amber nectar. I know people love Supermalt but Karibbean Kola and Black Grape were my drinks. Sweet beyond words but the flavour! They were exquisite.

West Indian shops often have fridge shelves filled with them. That’s when you know you’re in the right place.

Speaking of delightfully sweet drinks contributing to diabetes in black people, it’s Nurishment! Besides the sugar, the cans have all the vitamins you need for the day and it comes in an assortment of flavours – my favourite is strawberry.

I still buy them every now and again but I always check the price. If they’re on offer, they’re about £1 otherwise I don’t pay any more than £1.40, which is the RRP. I don’t usually buy them in West Indian shops either.