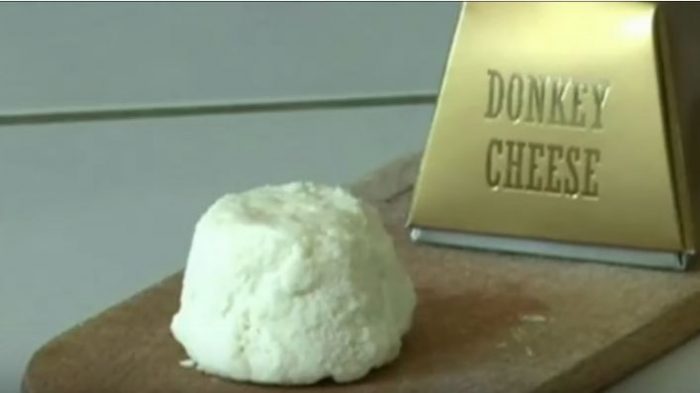 Balkan donkeys might as well be golden geese for what they produce. Pule cheese is hard to buy and therefore very expensive (you can try the Zasavica natural reserve in Serbia if you’re really desperate).

What is pule cheese?

Pule cheese (or magareći sir in Serbian) is a type of cheese made from made from 60% donkey milk and 40% goat’s milk.

How much does pule cost?

According to cheese.com, a pound of pule costs approximately $576 a pound (about £426). But why is it so expensive? Scarcity. Donkey milk is very rare and difficult to produce so not something you’d waste on a cup of tea.

Why is it so rare?

A female donkey (known as a ‘jenny’) only makes around 3 pints of milk a day, which is about 25-30 times less than a cow. There are also fewer solids in donkey milk compared to cow’s milk so more is needed to make the same amount of hard cheese. Then you have to factor in labour costs as machines aren’t cost-effective for such a small enterprise. It’s just 100 endangered Balkan donkeys and a few milkers. You also have to order the cheese in advance before it’s made to reduce waste which makes sense.

You may be wondering what you’re getting for cheese worth so much. Well, don’t expect culinary nirvana (unless you like manchego). The cheese is white and crumbly and packs a strong flavour similar to the La Mancha cheese. It’s nutritional value also shares similarities with another type of milk billions of babies enjoy every day: human breast milk. Amongst the vast array of milk brands on offer for babies, donkey milk is the most unique for sure.

Where can you buy it?

The good news is pule cheese is exported to the UK, Germany and the rest of the world are expected soon but you may have heard in the news a few years ago that Serbia’s own Novak Djokovic bought the world’s entire supply in 2012. I wonder if he had to ‘pule’ some strings to arrange that. *ahem* Sorry, that was too cheesy, even for me.

100 – The number of Balkan donkeys left on the planet

Update: apparently, there’s a song called Pule Cheese. Do what you will with that information.