I loved the first Sonic movie. It was the last film I saw before the pandemic and I still carry around the ticket stub as a sentimental reminder of the film and a time before my life was changed by this horrible virus. But Sonic 2 is coming in April 2022 (please?) and Paramount dropped a new trailer earlier today.

Verdict: I am hyped!

It features Sonic (of course) alongside Dr Robotnik in his “new” bald-headed/wild moustachioed style and the introduction of Tails. Oh, and that other character. You know, the red one with the knuckles. I think he’s called Punchy or something…

When this comes out, it will be the next film I see in the cinema. And I’ll keep that ticket stub too. Did I say I was hyped? I’m currently reading through the archives of kottke.org and stumbled on this article from March 2002 commending Jim Carrey’s performance in Man On The Moon. And then I remembered the documentary about his behaviour on the set of the film. 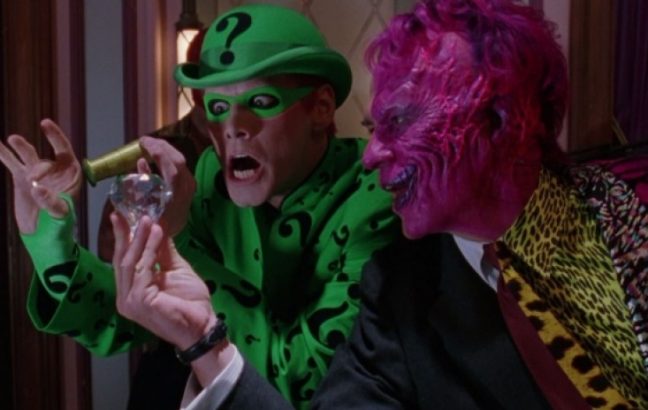 I remember going to see it at the cinema back in 1995. I even collected the sticker book that came with it. But Batman Forever has not aged well. In my twentysomething wisdom, I started spotting inaccuracies and considered writing them down… until I found someone on YouTube who’d got there first.

Jeremy Scott is a writer and entertainer from Nashville and his CinemaSins series on YouTube is hilarious. For this episode, he flicked through a host of plot holes in Batman Forever in “18 minutes or less”. There’s also a mistake from Jeremy amongst his own corrections but you’ll have to watch to find out what it was.

In defence of Batman Forever, there were some good elements. Val Kilmer was actually a decent Batman/Bruce Wayne. Not as dark and monosyllabic as the GOAT Michael Keaton in Batman and Batman Returns, but not as George Clooney-y as George Clooney in Batman and Robin. Jim Carrey as Edward Nygma/The Riddler was pretty good too. As camp as you’d expect from a Joel Schumacher movie and a stylistic nod to the 60s TV series (which I also loved as a kid).

Stream Everything Wrong With Batman Forever via the YouTube player below.

In case you weren’t aware of the horror that is Batman & Robin, CinemaSins has it covered with a 20-minute video detailing all the mistakes and continuity errors. I’ll admit to enjoying this film when I was seven, not least for the inclusions of Alicia Silverstone and Uma Thurman. I know better now.

Acting in the pre-Nolan Batman movies was never stellar. It pretty much peaked at the start with Michael Keaton’s brilliant performance as Bruce Wayne/Batman, Jack Nicholson as The Joker, and Kim Basinger as Vicky Vale.