Is the English word for daughter related to a Sanskrit word meaning “one who milks”? Yes, no, and maybe is the answer. 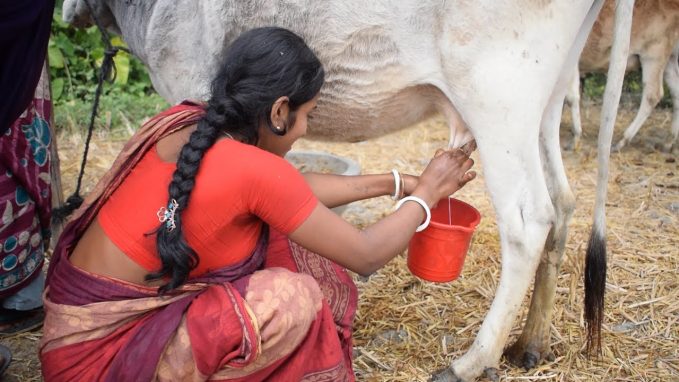 Victor Mair wrote a very in-depth piece on the etymological origins of the word “daughter” and its connection to milking cows.

I was just thinking how important cows (and their milk) are for Indian people and was surprised that’s reflected in such a fundamental word for a family relationship as “daughter” — at least in the popular imagination.

Upon further investigation, Mair traced “daughter” back to its roots, via Middle English, Old English, Proto-West Germanic, Proto-Germanic, Proto-Indo-European, and finally Vedic Sanskrit—duhitṛ (“one who milks”).

But rather than take Wikitionary’s word for it, Mair posed two questions to a host of linguists:

Enter a mixed bag of responses for and against the cognate connection. I won’t list them all here but if the answers were on a spectrum, every part of it would be covered but here are two extremes:

duhitṛ is indeed cognate with Eng. daughter. While I’m no kind of Indo-Europeanist, I do recall hearing that connecting it with √duh, dogdhi, etc. is spurious. But I don’t have any references to hand.

Vedic duhitár- does NOT mean ‘one who milks’! That’s a 19th-c. myth that was exploded generations ago.

Don Ringer—American linguist, Indo-Europeanist, and Professor of Linguistics at the University of Pennsylvania

Read the article over at Language Log and choose your own etymological adventure. And if you’d prefer articles on milk from other animals, check out pule, made from donkey milk, and cheese made from moose milk.