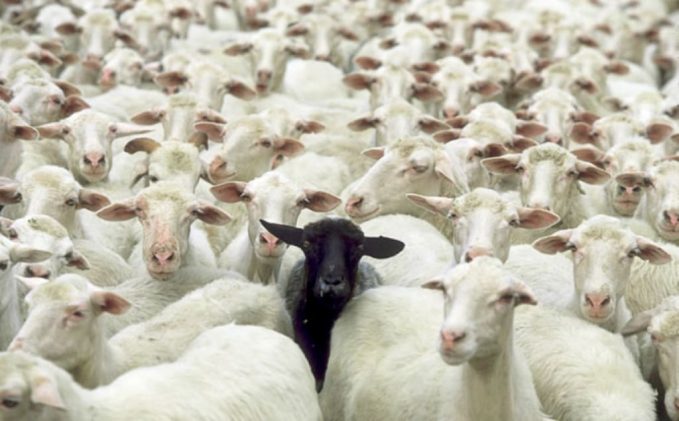 Ever wondered where the term “black sheep”, to denote a bad character, came from? Well, language blog Grammarphobia answered that very question but not before taking a counterquestion first:

Q: You say the phrase “black sheep” has been used to mean a bad character since the 17th century. That might be true, but it’s only the result of an even earlier meaning. “Black sheep” is actually a very old weaving term. Black sheep were considered unlucky because you couldn’t dye the wool any other colors.

Grammarphobia couldn’t find any instance of that terminology before or after the bad character definition but suggested a possible link with the “disreputable usage”:

The Oxford English Dictionary’s earliest example of “black sheep” meaning a bad character is from a 17th-century religious treatise about the conversion process in Congregational churches of New England:

“Cast out all the Prophane people among us, as drunkards, swearers, whores, lyers, which the Scripture brands for blacke sheepe, and condemnes them in a 100. places.”

They then go further back to the 16th century biblical texts and a passage from the 2013 edition of The American Heritage Dictionary of Idioms which suggested that the use of “black sheep” for a person of bad reputation was “based on the idea that black sheep were less valuable than white ones because it was more difficult to dye their wool different colors.”

But a direct link between them? Nothing concrete but not totally implausible. Finally, Grammarphobia discussed the general etymology of “black” as a negative descriptor which would tie the two concepts together, albeit with loose string.

I can still remember the faux debate between White people over the alleged banning of singing “Baa Baa Black Sheep”. You can’t say anything these days. Or in 1997.