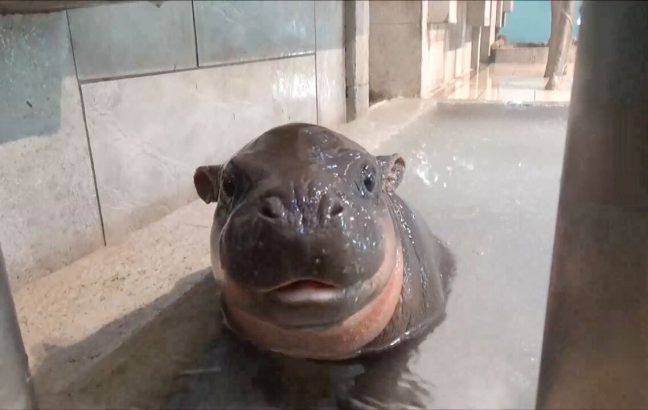 Tam Tam is a pygmy hippo from Osaka, Japan. He was born in February 2019.

As pygmy hippos are classed as Endangered, it’s remarkable to see newborns anywhere, let alone Far East Asia where they aren’t native. But the World Conservation Union estimates that fewer than 3,000 pygmy hippos are left in the wild so captivity is unfortunately the safest place for them.

The video below shows Tam Tam at swimming in the pool showing his growing teeth and nursing underwater. But above all else, it shows him being the cutest baby pygmy hippo in Japan.

Stream it below and consider a donation to the Pygmy Hippo Foundation.

Hippo related: Pablo Escobar’s hippos and 10 hippos from cartoons, literature, and other media. 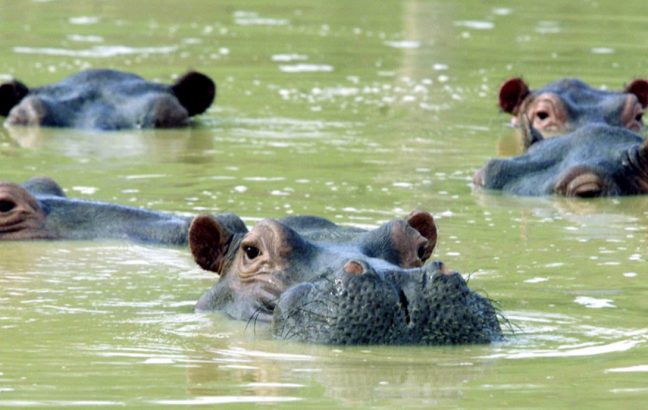 Spoiler alert: I love hippos. I even have a “hippos” Google Alert which is how I found out about this story from, believe it or not, Ripley’s Believe It or Not.

The story goes that Pablo Escobar acquired four hippos for his zoo in 1981. But in 1993, he was murdered and the government couldn’t maintain his zoo so the animals were sent away. Except for the hippos. They were left to their own devices in the Colombian wilderness and 4 became about 100. The hippos have been a source of debate, dubbed “cocaine hippos” and seen as invasive creatures. But on the other side, people are asking whether the hippos are a benefit to Colombia’s ecosystem.

Hippos are nocturnal herbivores and often graze on grass at night. And when it’s time to go to the hippo potty, they do so in rivers and lakes which is an essential feeding source for fishes that live in the water too. And so the food chain cycle continues. But that works in places where hippos are native and the ecosystem depends on that behaviour. In Colombia, that might not be the case and scientists fear fishes may actually die and water flow may be affected.

But—another but—a paper published in March suggests hippos might be doing what they should have from the beginning. Animals similar to hippos, known as notoungulates, used to live in South America and provided much-needed nutrients to the area, alongside the giant llama.

So the crux of the debate is: are the hippos invading land that should never have been theirs or are they restoring natural order? After all, the reason why Colombia’s ecosystem is the way it is (for good or bad) is because of humans. Modern animal extinction is often due to humans killing them for sport, meat, and the hell of it. So I’m all for Pablo Escobar’s hippos living their best lives.

I want to start by saying I’m writing this because I love hippos. I donate to a pygmy hippo charity every month and I think they’re wonderful creatures. Unfortunately, the common hippopotamus (Hippopotamus amphibius) is classed as Vulnerable (pygmy hippos are Endangered) which absolutely sucks because they’re wonderful creatures and they’re being killed for meat, their tusks, and “sport”.

But this is a positive article and it’s dedicated to ten hippos from cartoons, literature, animated movies, and anything else I could think of.

Tom Poes (or Tom Puss in English) was a Dutch comic launched in 1941. Its author, Marten Toonder wrote the comic until it was discontinued in 1986 and it became one of the Big Three of Dutch comics.

The main characters were Tom Puss, a little white cat, and his friend Oliver B. Bumble, a big brown bear who was the lord of a castle. Dirk Dickerdack was an affluent hippo who was mayor of Rommeldam, their home town. Unfortunately, he seemed to suffer from affluenza and cared more about the town than those who lived in it.

Hyacinth made her first appearance in Disney’s Fantasia back in 1941. She was a ballet dancer who appeared in the segment, Dance of the Hours. She represented the 12th hour, or “noon”. She also made a cameo appearance in Who Framed Roger Rabbit. Her only line was “Oh, excuse me,” when she passed Eddie Valiant. She was voiced by Mary T. Radford in the movie.

Hilda Hippo from The Busy World of Richard Scarry

Not to be confused with Hilda Hippo from Mickey and the Roadster Racers (voiced by April Winchell, daughter of Paul Winchell who used to voice Tigger from Winnie the Pooh). Hilda was awkward but pleasant and was allergic to roses. She appeared in numerous forms of Richard Scarry media, including the animated series which I loved as a kid.

British readers will almost certainly know George, the pink hippo from Rainbow. His shyness was said to represent shyness and introversion shown in children, as a way to relate to viewers. He was also a little camp which may have been linked to his pink exterior.

George and Martha were a pair of friendly hippos from a book series of the same name, illustrated by James Marshall between 1972 and 1988. They were later transformed into an animated children’s series in 1999, and spawned a musical in 2011. Nathan Lane and Andrea Martin voiced George and Martha.

Gloria the Hippo from Madagascar

One of the biggest hippo characters in recent times, Gloria (voiced by Jada Pinkett-Smith) was part of the gang who were taken from their home in Central Park Zoo and flown to Madagascar by mistake, where they had to learn to adapt in the wild. Gloria was the one who put the other animals straight in true Jada Pinkett-Smith style. Her daughter, Willow, voiced Gloria as a baby hippo in Madagascar: Escape 2 Africa.

I never saw The Peter Potamus Show so I only know him from Harvey Birdman but he was a sleazy hippo in that. He was also lazy despite his status and success and had a weird obsession with sandwiches and strippers. His catchphrase was “Did you get that thing I sent you?”

A more obscure hippo, Tillie starred in animated movie Cats Don’t Dance. She was voiced by Kathy Najimy (Sister Act, Hocus Pocus, King of the Hill) and played a “happy-go-lucky hippopotamus who tries to find the best in every situation”. In many ways, she was like Sister Mary Patrick from Sister Act with her penchant for giggling.

The hippo from Silentnight

When I was younger, I used to stare at the hippo and chick from the Silentnight logo on my parents’ mattress. The hippo was dressed in his stripey pyjamas and I always thought he was so cute. Then, Silentnight started making TV adverts and gave him a deep Northern accent which made him even cuter (I’m Northern too so I’m biased).

The final hippo of the list might be one of the most obscure hippos of them all, from a global perspective. In 1975, a Hungarian animated film called Hugo the Hippo was released in the US and a year later in Hungary. It had a budget of $1m and the English-speaking version starred the likes of Jimmy and Marie Osmond.

The film was about a hippo called Hugo who escapes captivity in Zanzibar and flees to Dar es Salaam in Tanzania. Meanwhile, an advisor to the Sultan of Zanzibar tries to catch him. Interestingly, the US production of the film was run by Brut Productions, a subsidiary of Fabergé cosmetics – the same brand that made the ornamental eggs.