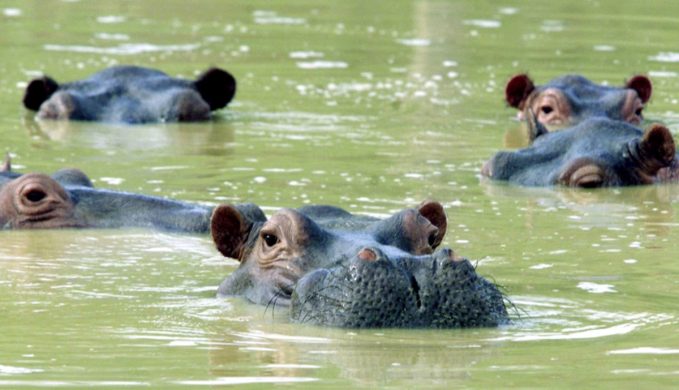 Spoiler alert: I love hippos. I even have a “hippos” Google Alert which is how I found out about this story from, believe it or not, Ripley’s Believe It or Not.

The story goes that Pablo Escobar acquired four hippos for his zoo in 1981. But in 1993, he was murdered and the government couldn’t maintain his zoo so the animals were sent away. Except for the hippos. They were left to their own devices in the Colombian wilderness and 4 became about 100. The hippos have been a source of debate, dubbed “cocaine hippos” and seen as invasive creatures. But on the other side, people are asking whether the hippos are a benefit to Colombia’s ecosystem.

Hippos are nocturnal herbivores and often graze on grass at night. And when it’s time to go to the hippo potty, they do so in rivers and lakes which is an essential feeding source for fishes that live in the water too. And so the food chain cycle continues. But that works in places where hippos are native and the ecosystem depends on that behaviour. In Colombia, that might not be the case and scientists fear fishes may actually die and water flow may be affected.

But—another but—a paper published in March suggests hippos might be doing what they should have from the beginning. Animals similar to hippos, known as notoungulates, used to live in South America and provided much-needed nutrients to the area, alongside the giant llama.

So the crux of the debate is: are the hippos invading land that should never have been theirs or are they restoring natural order? After all, the reason why Colombia’s ecosystem is the way it is (for good or bad) is because of humans. Modern animal extinction is often due to humans killing them for sport, meat, and the hell of it. So I’m all for Pablo Escobar’s hippos living their best lives.