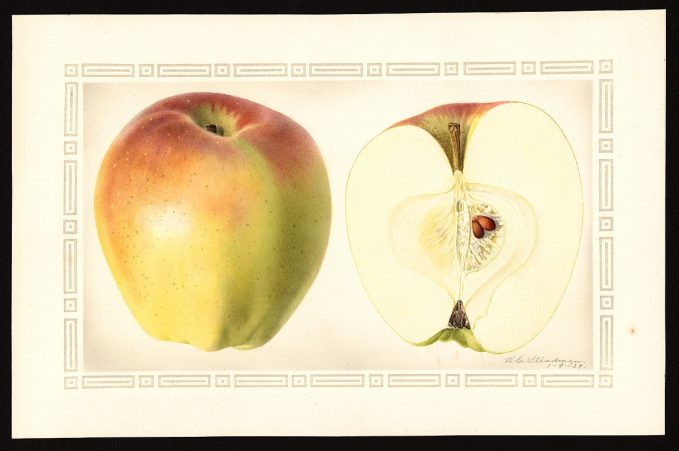 Prior to a trip to the United States in 1871, Hosokawa Junjirō—who is best known as a legislator, not a farmer—heard from an American agriculturist employed by the Meiji government that apples would be worth growing in Japan. While traveling in the United States on a mission to study the country, Hosokawa acquired a large number of Ralls Janet apples, a variety famously cultivated by Thomas Jefferson. The trees arrived in Japan in 1874, and within the next year, they were distributed to research sites in Hokkaido, northern Honshū, and Nagano. Apples also found their way into farming communities through other pathways. John Ing, a Methodist missionary in Aomori, introduced a different sort of apple to Hirosaki City, and from it, former samurai Kikuchi Kurō cultivated Japan’s first apple, calling it “Indo,” after Ing’s home state of Indiana. This would become the parent breed of a number of popular Japanese varieties, such as the Crispin.

After hard work and a number of decades, the Fuji apple in 1939 when pollen from Red Delicious apple plants was mixed with Ralls Janet flower pistil. It was originally named “Agriculture-Forestry No.7” but almost ceased to exist:

As World War II raged, the apple-growing communities of Japan struggled. In 1941, an early frost wrecked the crop. In 1944, it was a typhoon; the next year it was an ill-timed snowfall that completely wiped out the harvest. Just after the war ended, a man-made disaster ensued in the form of new taxes that knocked the wind out of the apple industry, followed by a price collapse in 1948.

Of course the Fuji apple didn’t disappear and with some clever marketing and a reignition of the apple industry in the 50’s, it was back and more successful than ever.

Today, the Fuji apple is one of the most popular apple cultivars in the US and in China in 2016, its fresh apple exports reached 986,000 tons of which Red Fuji apples accounted for about 70% (my rough maths says that’s the equivalent weight of over 100,000 African elephants).

Update: Gastro Obscura also has a feature on the Japanese tachibana, an endangered citrus fruit.