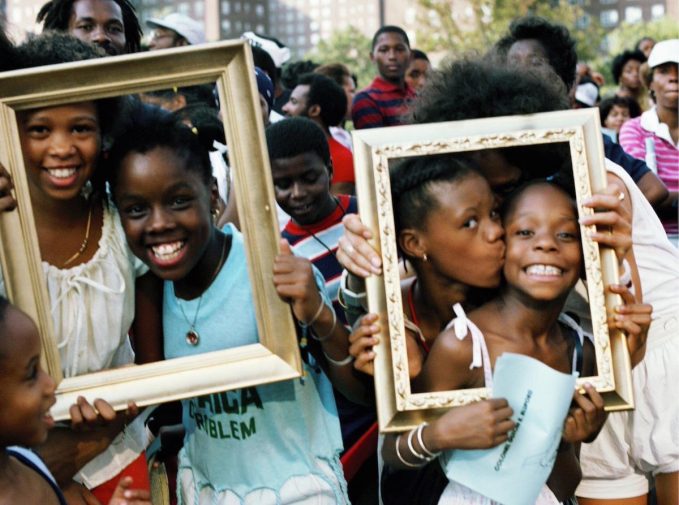 Amongst the plethora of camp looks at the Met Gala on 9th May was Tracee Ellis Ross with an empty frame. But it was much more than that. Her black Moschino dress was gorgeous (as was she because it’s freaking Tracee Ellis Ross) but the golden picture frame was there as a tribute to Lorraine O’Grady.

Born to Jamaican parents in Boston in 1943, Lorraine O’Grady grew up in the West Indian Episcopal church. It was the first of its denomination in the city and “until her sister, Devonia, died then she stopped believing”. Her journey into art took a few turns via a major in economics, a minor in Spanish literature, working as a translator, a critic and a government intelligence analyst.

In 1983, as her persona Mlle Bourgeoise Noire, she created Art Is…, a parade float entered into the annual African American Day Parade in Harlem. She persuaded the performers and parade watchers to pose with empty frames. The reclamation of blackness as beauty through the medium of fine art was, and is, the idea of “black campness”. Pardon my French but that’s fucking genius.

“Camp taste nourishes itself on the love that has gone into certain objects and personal styles. The absence of this love is the reason why [certain kitsch items] aren’t Camp.”

The idea that such a beautiful nuanced look was done so effortlessly in the eyes of millions warms my heart. Tracee Ellis Ross addressed the look on Instagram with the caption, “RECLAIMING THE NARRATIVE ~ black camp. Thank you #lorraineogrady for existing and creating ‘Art Is.'” As Gianluca Russo said for Teen Vogue, “the outfit opened the eyes of many to the contributions black men and women have had on camp fashion.”

Which brings me onto Lena Waite’s amazing outfit: a Pyer Moss pinstriped suit with “Black Drag Queens Invented Camp” emblazoned on the back and the pinstripes made out of lyrics from Diana Ross’ “I’m Coming Out”. Thinking about it is sending my head spinning because of all the connections to black art, campness, queerness, black power… wow. It’s really a lot and I’m grateful to be around in a world where it exists.

(And credit to Shelby Ivey Christie on Twitter for shining a light on the subject.)