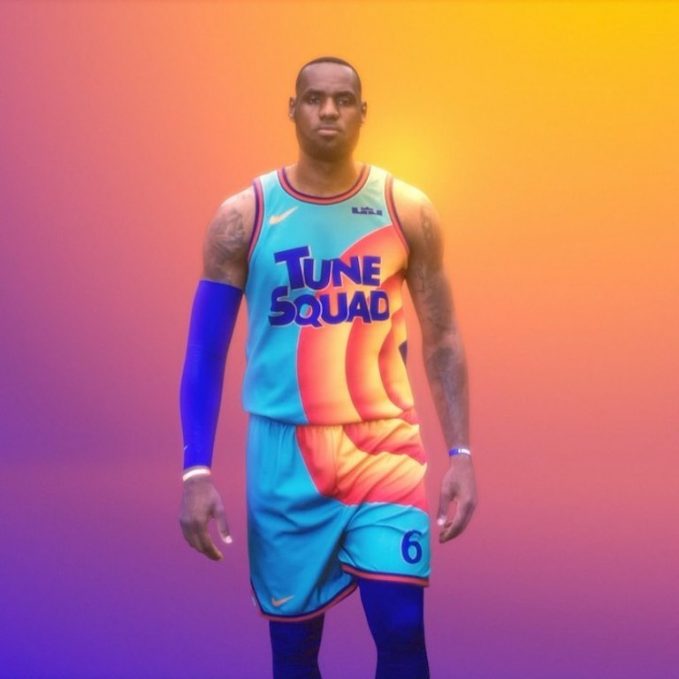 I watched Space Jam with my son for the first time last week (his first time; my 7 millionth). He loved it and now I can show him something from the upcoming sequel. The LeBron James Family Foundation Instagram account posted the first look at King James in his “A New Legacy” jersey.

It’s more colourful than the original white jersey with blue and red trim and that caught me off guard. I’m interested to see how the Looney Tunes gang look in it.

Esquire gave an in-depth analysis of the new kit (certainly more comprehensive than I’d care to give it):

A reading from the Book of LeBron: When James did the whole taking my talents to South Beach bit in 2010’s ‘The Decision,” he traded number 23 for number 6. The new digit became synonymous with his newfound status as a villain in the league, something he played into a lil’ bit (R.I.P. Mask LeBron), which wouldn’t really be redeemed until he won a ring in Cleveland.

Check the shorts—number 6 is back.

OK. What’s the next logical thing to do after you save your planet from the grubby green hands of a raging alien capitalist? Secure a Nike sponsorship! With the entire NBA devoting little squares of jersey real estate to sponsors like Bumble, even the Tune Squad, apparently, isn’t opposed to making an extra buck from a corporate overlord. You have to ask: Did word of the Tune Squad’s heroics somehow reach Earth? Making them something of a well-known, traveling hoops act actually worth sponsoring—a la the Harlem Globetrotters?

When I first heard Space Jam was getting a sequel with LeBron James, I was sceptical. The original was a big part of my childhood and I wasn’t sure if I wanted the magic to be replicated. Nothing against LeBron (his cameo in Teen Titans Go! showed me he has the cartoon acting chops), but I don’t know how good the writing will be so we’ll have to see.

As for the shirt number and the brand sponsorships… I couldn’t care less. Apathy seems to be a common theme with recent branding announcements.