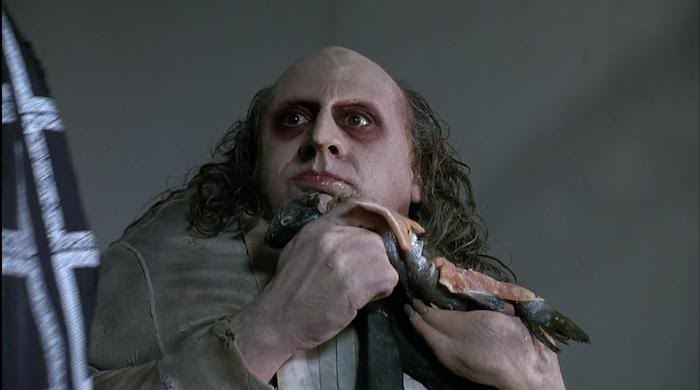 I like to look at what kind of things people search for to find the site or what Cultrface comes up for in general. One of the most interesting search queries was “did danny devito eat a real fish in batman returns” and it was something I’d wondered over the years. So I looked it up myself. And he did.

In an interview with Nicholas Fonseca for The Daily Telegraph in Australia in 2019, DeVito also revealed what kind of fish he was eating:

The Penguin eats fish, quite grotesquely, in that movie. What were you actually eating?

Oh yeah, that was real fish. Bluefish. Fresh, of course. Movie stars only eat fresh fish. Don’t try to pawn two-day-old fish on us. You bring that right from the market.

DeVito chowed down on raw fish as the Penguin in Batman Returns. Yum.

Surely that didn’t taste good after a while, though.

Well, in the middle of the action, I would squeeze a mixture of mouthwash and spirulina into my mouth — but that was because I needed to ooze this green, kind of black thickish liquid out of the corners.

(Sidenote: bluefish, known as tailor in Oceania, and elf or shad in South Africa, is a popular food fish but it is also a vulnerable species due to widespread overfishing)

So there you have it—The Penguin really did eat raw fish when Max Shreck announced he would help him run for mayor of Gotham City. Is it weird that, as a kid, it made me hungry? Is it also weird that, as an adult, it still makes me hungry?

Stream the scene below.