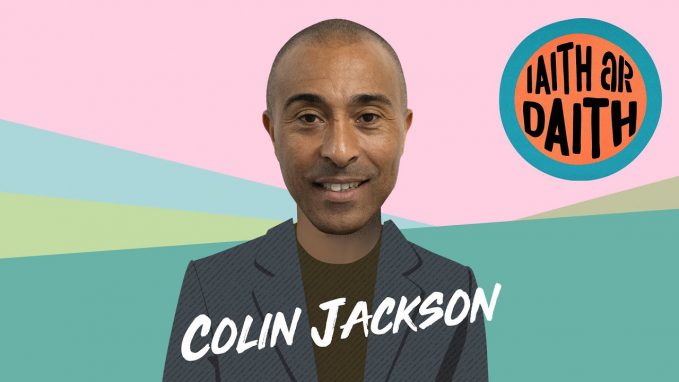 I grew up watching him dominate athletics in the 110m hurdles and, as a Black boy seeing a Black man with a similar skin tone and body shape as me bossing it amongst his peers was super inspiring. Even in adulthood, I enjoy listening to his punditry and commentary for the BBC. So while looking up clips of his old races, I found this 15-minute video detailing his journey through the Welsh language.

Colin Jackson was born in Cardiff in 1967 but his understanding of Welsh fell by the wayside during school as he explains in the video.

We had Welsh as Welsh lessons from the age of four, so I heard Welsh quite a lot. When I went from primary to secondary school, French and German were the language that was introduced to us then and I thought to myself well I’ll try something new and that’s when I completely lost the grasp of Welsh.

With the help of his mentor, Eleri Siôn, Colin practised his Welsh speaking skills in the best way possible – by immersing himself in Welsh culture. He taught school kids how to do hurdles, did a radio interview, showed off his dancing skills, and commentated on youth indoor athletics competition—all in Welsh.

Besides the fact it’s Colin Jackson, I found this so inspiring as an aspiring polyglot. I’ve been learning Portuguese for the past 3 years and while I’m nowhere near Colin’s level with Welsh, it was comforting to see his journey and I’ll be back on Duolingo from today, I promise!

Stream it below, or as they say in Wales, ffrydiau video isod.