I’ve already shown my love for Steve Harvey memes but I’ve recently got into “Bully Maguire” memes, involving clips of Toby Maguire’s rendition of Peter Parker in Spider-Man 3. This one is expertly crafted, showing Parker trying to win a staff job with double the money. Look out for special guest star Harry Osborne. 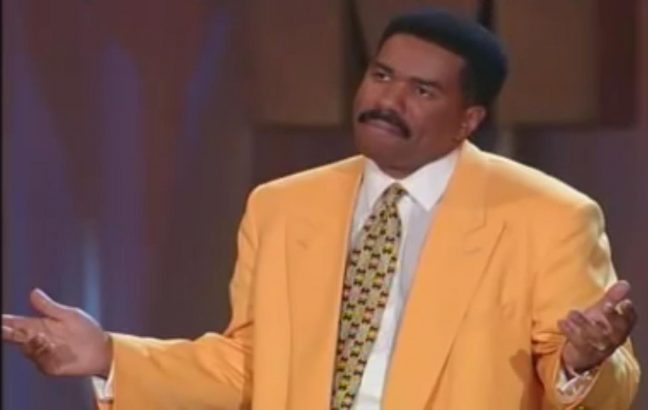 When I think of Steve Harvey, I think of his bald head, terrible opinions on women, messing up at Miss Universe 2015, and Family Feud.

But I remember when Steve Harvey had hair and wore baggy 90’s suits. That used to be the norm in my mind. But before the TV presenting and awful books, he was primarily a stand up comedian and his “getting fired” sketch is hilarious.

“Black people handle getting fired different from White folk. You can’t fire us the same. It ain’t gon’ go good.”

The sketch centres on the difference between how Black people take the news of getting fired compared to White people. Like all the best Black comedians, Steve nails the uptightness of White Americans in their reactions as well as the stereotypically exaggerated reactions of Black Americans. It also highlights the differences between Black and White people in working environments and expectations of employment (ie. Black people are often first to go and White people don’t expect to get fired).

If you’re familiar with his comedy, you’ll know how wild this can get and it’s top tier comedy. But let me not explain all the reasons why it’s funny before you’ve watched it. I miss Vic Berger’s work, from his hilarious will.i.am futuristic edit to 30 minutes of daytime TV and advertising. But this one is probably my favourite.

It shows Steve Harvey hosting Family Feud and losing the will to live. His descent into perceived madness comes from a series of wild answers to questions, all pieced together and dramatised for effect of course. But the reactions and repetitive responses make the video.

Some of my favourite quotes include:

And to complete the video, there’s a Karen who winks at the end. No wonder Steve lost it.