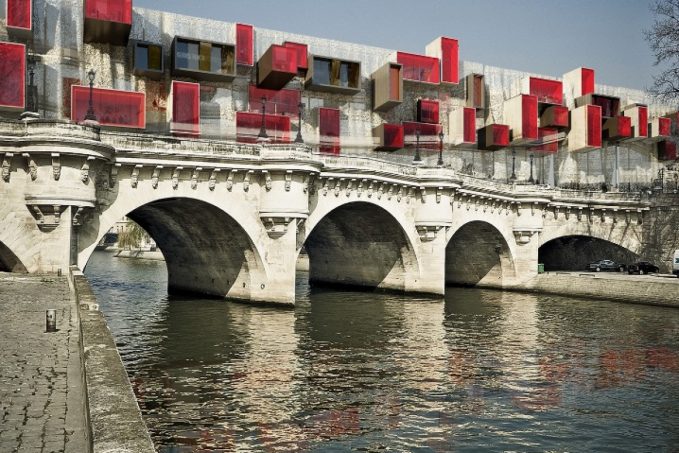 ABW Architects’s Róisín Hanlon wrote a piece on parasitic architecture, the art of attaching a construct onto another, larger building. The concept attempts to solve three key issues with housing:

In the piece, Róisín looked at some of the more interesting uses of parasitic architecture:

Really interesting parasitic design makes us look at a space that we may not even have realised was under-utilised. Fernando Abellanas designed a small studio for himself nestled between the concrete beams of a bridge in Valencia. The setting is brutal and urban but with Abellanas’ light materials and playful construction the installation has a cosy, dreamy quality to it, much like a child’s tree house. The structure is a platform suspended on wheels from the beams which can be moved along the underside of the bridge using a handcrank. Much like a swallows nest, the studio uses a high-up corner that most passers by wouldn’t even look at, let alone design an installation for.

I don’t have a fear of heights but that looks scary as hell to me. Also, how do you get in and out of that thing? And what if it fell?

While I find the concept of parasitic architecture interesting, I question the connotations of calling it “parasitic”, particularly in the context of homeless people, who are already seen as parasites by society. There’s also the definition: a parasite generally feeds of its host. Are housing extensions parasitic in nature? Are all buildings parasitic by “benefitting” from grounds they’re built on? And what are the legalities of it in other countries?

For more on the style, read CNN’s piece on it and BBC’s article featuring the remarkable use of La Grande Arche de La Défense in Paris as a hub for modular units.