From a French soup for New Yorkers to cool down in the 1910s to blockbuster comic book movies, vichyssoise has had an illustrious career. 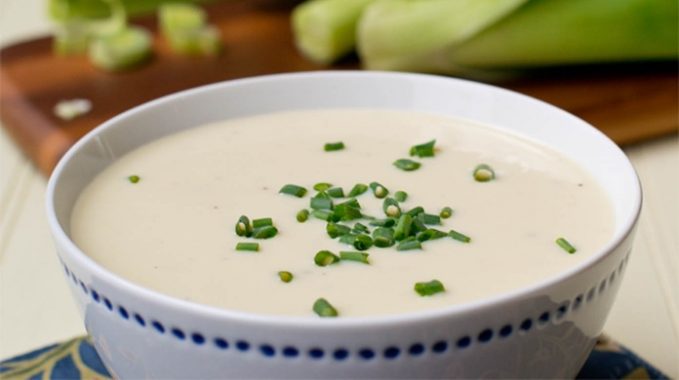 When you think of cold soup, your mind immediately goes to gazpacho, a Spanish soup comprised of stale bread, olive oil, vinegar, garlic, tomato, and cucumber. But fans of Batman Returns will think of another kind: vichyssoise.

In the famous scene with Bruce and Alfred, the butler hands Bruce the bowl of creamy soup to which he spits it out—”it’s cold!” And the immortal line:

I didn’t understand the concept of cold soup as a kid and I still wouldn’t try it but the backstory of vichyssoise gives an indication of why it’s a thing.

Vichyssoise is a potato and leek soup created in 1917 by French chef Louis Diat of the Ritz-Carlton. He made it cold for restaurant guests to keep cool during the summer (which is ironic as the winter of 1917 in New York produced the temperature recorded in the city: 2°F or −17°C on 30 December 1917 at Central Park).

Given the fact that Batman Returns has a 1920s/1930s vibe to it and Bruce is a billionaire who you wouldn’t expect to get a drive-thru burger (which is funny because Michael Keaton later played former McDonald’s owner Ray Kroc in The Founder), vichyssoise seems like a logical choice.

In terms of recipes, this one from Simply Recipes looks like a good one as well as Anthony Bourdain’s Les Halles Vichyssoise recipe. Or if you’re desperate for something quick and maybe hot during the winter, you can get a can of potato and leek soup and add any extras you feel it needs.

Batman Returns and soup related: a Turkish hangover cure made from tripe, Hungarian dishes and recipes, and did Danny DeVito eat a real fish in Batman Returns.