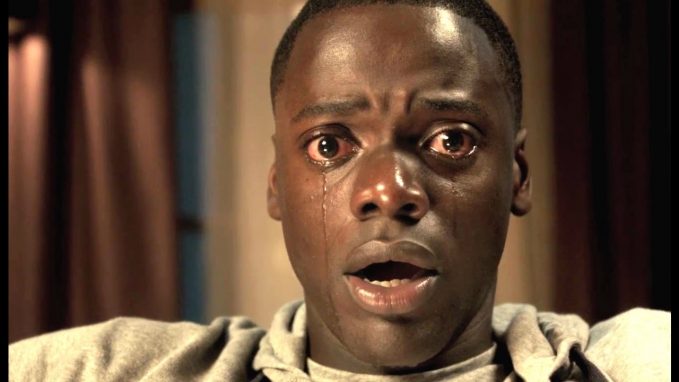 Get Out is probably one of the most unique and intriguing horror films I’ve seen since It Follows. In case you’ve been living under a rock for the past month or two, Get Out is a huge box-office success and a critically acclaimed horror/thriller/comedy mash-up from the mind of Jordan Peele. A lot has been written about how Get Out derives its horror from racial overtones. This is certainly true and as a young black man myself, what resonated with me most was how Chris attempted to initially combat the awkwardness of the situation – particularly through his language.

In Get Out, Chris Washington, an African-American, accompanies his white girlfriend Rose to meet her parents in a predominately white community but he soon discovers something sinister is afoot. Most black people in predominately white countries are aware of the concept of microaggressions. Get Out successfully highlights how those day-to-day microaggressions contribute to fetishizing an individual by reducing them to stereotypical components. Instead of greeting Chris normally, white characters in the film adopt forced African-American slang and proclaim their love of Obama. To them, Chris isn’t ‘Chris the Individual’, instead, he’s reduced to ‘Chris The Black Guy’ – a thoroughly isolating experience.

Chris’ attempts to remedy this isolation strongly resonated with me. Whilst staying with Rose’s parents, Chris only encounters three other black people. His first solution to avoiding that segregation is to appeal to them for solidarity. But there’s something ‘off’ about the black servants who serve Rose’s family, and similarly something unsettling about the only other black man who Chris meets at the parents’ party. When he tries to engage with them on their assumed level, i.e. through African-American idioms, slang and gestures (the fist bump for example), they don’t reciprocate.

On my initial viewing of Get Out, it got me thinking about the ‘black guy nod’. Personally, I don’t even know when I learned or when I started doing the ‘black guy nod’, otherwise called just ‘the nod’ or the ‘Negro nod’. This refers to a knowing look and small nod of the head shared between black people whenever they see each other in an area without many other black people.

Last year, when walking down the streets of Phnom Penh, Cambodia, I did it when I noticed a black guy walking past me and he kindly returned the gesture. We didn’t even say anything to each other, we just nodded knowingly, kept it moving and I never saw him again. I don’t know his name, where he was from, but it just seemed like something I ought to do.

It’s not the only tool for establishing solidarity; code-switching is an effective tool for connecting with someone from the same culture. Code-switching refers to when a speaker alternates between two or more languages or dialects. It’s often context and audience dependent. For minorities, this can be especially important. Referencing shared cultural experiences can be a form of emotional survival. And considering that survival is at the core of Get Out, it’s probably the best exploration of code-switching I’ve seen on cinema. (Dave Chappelle has a hilarious stand-up routine where he mentions Black people looking out for each other in dangerous situations.)

Some academics propose that this type of intra-communal code-switching can be divided into “we” and “they” codes. “We codes” are geared towards the home, family and immediate community, while “they codes” are associated with wider public discourse. A “we code” might consist of something as overt as a shared language or regional dialect that people of a shared heritage might use versus the standardised language they use when corresponding in formal settings. “We codes” establish solidarity for people who might be marginalised and minorities in a specific context.

A good example of Chris attempting a “we code”, is when he tries to establish a rapport with Walter, a black groundskeeper who serves Rose’s family. It’s a short scene; whilst Walter is outside doing manual labour, Chris says to Walter, “they working you good out here, huh?” in a friendly manner. Potentially, this is Chris’ attempt to highlight a distinction between the wealthy whites who own the property and the African-American outsiders, namely Chris, Georgina and Walter. Walter responds by reaffirming his link with Rose’s family, leaving the audience to feel that Chris is alone and Walter is not an ally.

It’s an awkward moment when Chris tries to segue into a “we code” with fellow African-Americans in the town, only for it not to be reciprocated. For Chris and the audience, this confirms that there’s something ominous brewing in the community with regards to the way it views black people. This shifts the tone of the film from merely being a clumsy navigation of meeting the girlfriend’s parents (a la Guess Who’s Coming to Dinner) to a disturbing and unsafe atmosphere. There’s no one there who can relate to Chris, which poses a threat to him as the true horror of the story unfolds.

There are many things we can take away from Get Out. There are so many thematic points to unpick which makes me look forward to re-watching it. The importance of reciprocating code-switching is demonstrated by the fact that the only person looking out for Chris, is the person who is most relatable to him culturally and linguistically. It’s a film with a lot of substance, but my favourite aspect of the film is its encouragement for ethnic minorities, particularly African-Americans, to look out for each other.