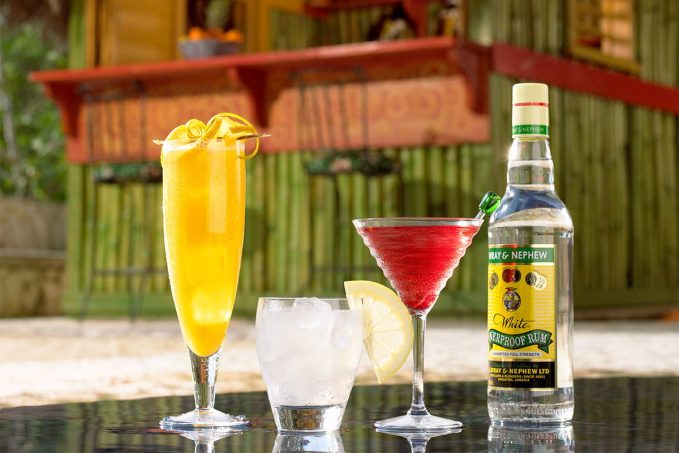 Of all the things my mum asked me to buy from the West Indian shop down the road when I was a kid, Jamaican rum wasn’t one of them (for multiple reasons – age being the main one). And while my parents never drank it, my mum still used it in fruit cakes (if you know, you know). Rum is a significant part of Jamaican culture and in this article, I’ll give a very brief history of the alcoholic beverage.

Let’s get this one out of the way. Rum is a liquor made from fermented molasses or sugarcane juice which is then distilled. You either get a clear liquid, where the rum is filtered and bottled straight away, or a dark liquid which is aged in charred oak or wooden casks (known as puncheons) before filtering and bottling.

Rum was introduced to Jamaica in 1494 by Christopher Columbus (but rum’s history goes even further back, to the 7th century India). By 1655, when Jamaica was under British rule, the colonialists brought the concept of rum-making and distilling over from another of their colonies, Barbados. Enslaved people were forced to work on plantations and their labour made rum become an even more popular drink.

Rum then became a strong form of currency, used in triangle trades with enslaved people. But when slavery was abolished in the 1800s, the rum industry suffered as enslaved people’s labour ran its production. In 1893, there were about 148 rum distilleries in Jamaica. Now, only 6 remain (the last three with an asterisk operate under National Rums of Jamaica):

But the quantity and quality of rum are improved and without the enslaved people. Jamaican rum is sold in over 70 countries around the world.

Hampden Estate Rum makes pure single rums, using wild fermentation and no added sugar. Its history goes back to 1753 when it operated as a sugar plantation under the ownership of Mr. Archibald Stirling. The estate changed hands in 1827 and during World War I, Hampden built the Hampden Wharf in Falmouth for rum and sugar shipments. Today, the wharf is a tourist destination and an entry port for some of the largest cruise ships in the world.

Appleton began rum production 4 years earlier than Hampton. Nowadays, Appleton makes its world famous Appleton Rum and New Yarmouth Estate thanks to the incredible work of master blender Joy Spence, who became the first female spirits master blender ever in 1997. In 1978, she graduated from Loughborough University with a Masters’ degree in Analytical Chemistry.

The estate was established in 1670 and its started making rum in 1741, 7 years before Appleton (who claim to have the oldest rum in Jamaica). Today, Worthy Park mixes the classic with the modern, having built a cutting edge distillery in 2005, but still opting to distill its rums in a traditional Jamaican Pot for a “heavy bodied rum full of esters and congeners”.

The limited company is a joint partnership between the Jamaican government, Demerara Distillers Limited from Guyana and Maison Ferrand, based in France. Between the three distilleries, National Rums of Jamaica processes over 13 million litres of rum a year, enough to fill 5 Olympic-sized swimming pool and have enough left over for a really good party.

In short, there are a lot and I’ll undoubtedly miss some (in which case let me know) and some of them are made at the same distilleries or not made in Jamaica but are classed as Jamaican rums (eg. Captain Morgan). Here are some of the most well known:

Don’t let anyone tell you Jamaican rum punch is the only cocktail you can make out of the island drink. There’s a history to consider so here are a few along with their stories.

The British Navy swapped brandy for Jamaican rum during the Anglo-Spanish War as their drink ration of choice. But it caused sailors to be even more despicable than they already were (they were from the British Navy after all). So in 1740, Vice Admiral Edward “Old Grog” Vernon issued a Captain’s Order that stated that all rum provisions had to be mixed with water, although the addition of “sugar and limes” was allowed. The new drink was known as Grog in his honour.

Nowadays, grog cocktails are still popular amongst seaborne types but also a mainstay at tiki bars.

There’s a dispute over who invented this Polynesian-themed cocktail.

Victor J. Bergeron claimed it as his own in 1944 in Oakland, California. But Donn Beach said it was based on his Q.B. Cooler cocktail created 11 years earlier. The tastes are different but regardless, why is a drink, allegedly named after the Tahitian word for “good” or “excellence” (maita’i), made with Jamaican rum? Well, that’s what Victor Bergeron used in his recipes and subsequent recipes were modelled on his concoction (along with Martinique rum).

The official International Bartenders Association (IBA) specified ingredients for a mai tai are:

Other rum cocktails include:

Phew, that’s a lot of alcohol. Jamaican rum’s colonial past mustn’t be overlooked. Enslaved people made the drink what it was for centuries before it was reclaimed by free Jamaican men and women. That’s not to say Jamaican rum has stayed within the island as the vast number of cocktails created by American Tiki bartenders and newer brands by European alcohol distillers can show. But you can’t beat the originals.

And, as always, drink responsibly.