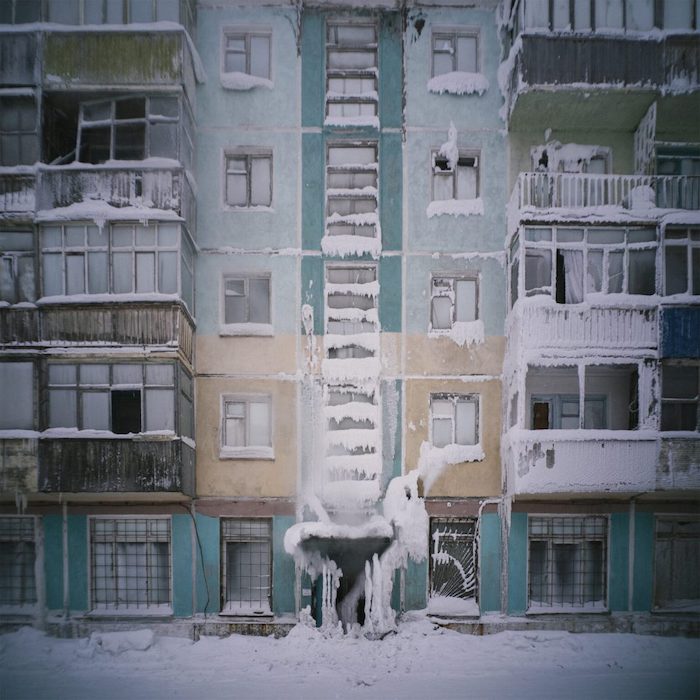 Nestled in the north-eastern part of the Komi Republic in Russia is a town called Vorkuta. It’s a coal-mining town with a population of about 50,000 and has the distinction of being the coldest city in Europe with a record temperature of −52 °C (−61 °F) [text is in Finnish].

Despite that population, many villages in Vorkuta are considered “ghost towns” covered in snow and ice. Weird Russia profiled the ice dwelling in March 2021:

Many of Vorkuta’s once bustling apartment buildings feature impassable stairwells coated with slick ice. There is no one left to defrost Vorkuta’s abandoned structures. Vorkuta’s remaining residents are continually relocated to more compact buildings that are more affordable to heat. With each passing year, more of Vorkuta’s buildings are reclaimed by the elements.

Vorkuta is swiftly becoming one of the world’s most haunting ghost towns. Thick sheets of ice and endless snowdrifts ensure that Vorkuta’s abandoned buildings remain literally frozen in time. Onlookers who are hearty enough to brave the extreme cold are never able to forget rooms full of stacks of books, rows of bottles, and bedroom furniture entombed in ice. The icy fate of Vorkuta is a sobering reminder that humans do not dominate nature as effectively as we think we do. Vorkuta reminds us that—in the coldest corners of the world—we are only one power failure away from our cities devolving into inhospitable ice palaces.

I’m sure Elsa from Frozen would love the place nonetheless.