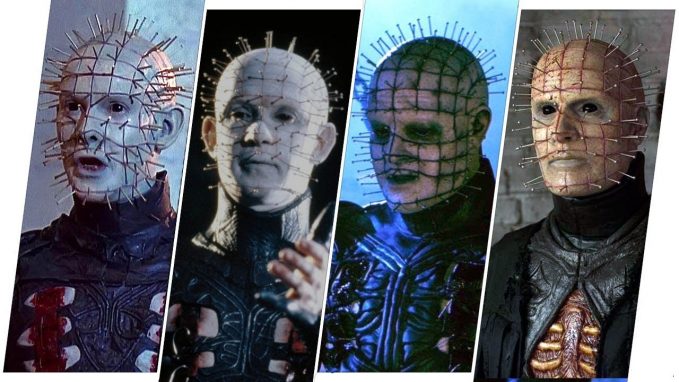 I stumbled on this video by Darwin’s Media last year, showcasing the evolution of Pinhead from the Hellraiser movies.

Pinhead is one of the leaders of the Cenobites, formerly humans but transformed into creatures which reside in an extradimensional realm, who travel to Earth through a puzzle box called the Lament Configuration in order to harvest human souls. His origins and the nature of the Cenobites vary depending upon the medium: while the character began as an amoral entity blindly devoted to the practice of experimental sadomasochism, later depictions have portrayed him as explicitly evil and even demonic in origin.

I’ve never watched Hellraiser (maybe I will one day) but I’ve always been fascinated by Pinhead and after watching the video, I’m a big fan of his one liners.

What I didn’t know was how many times he’d been portrayed, on film and television:

Pinhead has also appeared in The Simpsons, Robot Chicken, The Grim Adventures of Billy and Mandy, Family Guy, and South Park. That’s a lot of media for someone who doesn’t get the recognition he deserves compared to Freddy Krueger, Jason Voorhees, Michael Myers, or Leatherface.