No one has come close to Michael Keaton’s live-action portrayal of Bruce Wayne/Batman (emphasis on ‘live-action’ as Kevin Conroy goes toe-to-toe in the animated series). In the above video, iamthatroby explained why he loved Keaton’s Batman so much.

I have a hot, hot take for all of you: I believe that every single component of Batman the general audience loves is as a result of Michael Keaton’s performances in Batman and Batman Returns. The mannerisms, the sound, the look, the Batcave, the Batsuit. The two Burton films established this language for Batman that has been replicated time and time again.

I completely agree. Keaton set the standard that ever other Batman actor has followed. 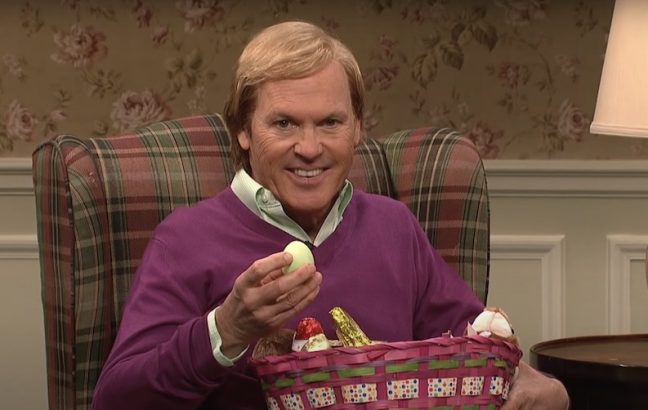 While looking for Michael Keaton movies to buy/rent on YouTube, I came across this skit from SNL Season 40 Episode 17 (2015) starring Michael Keaton.

Entitled “Easter Candy“, it shows Keaton as himself but in a very creepy way showing all the easter candy he has in his basket. He’s joined by Portia (played by Kate McKinnon) and a cameo from his friend Jordan (who’s “a nut” as you’ll see later on, played by Bobby Moynihan).

Keaton started out in comedy but pivoted towards more serious work during the late 80s and throughout the rest of his career, thanks to impressive roles in Clean and Sober, Batman, and Batman Returns. He then came back to prominence in 2014 in Birdman, winning a Golden Globe Award for Best Actor – Motion Picture Musical or Comedy and receiving a nomination for the Academy Award for Best Actor.

What I love about Michael Keaton is his range and having grown up knowing more of his serious stuff—that happens when you watch Batman and Batman Returns hundreds of times each in 28 years—I thoroughly enjoy his comedy, past and present. In “Easter Candy“, there are some hilariously creepy moments and some new quotables added to my repertoire.