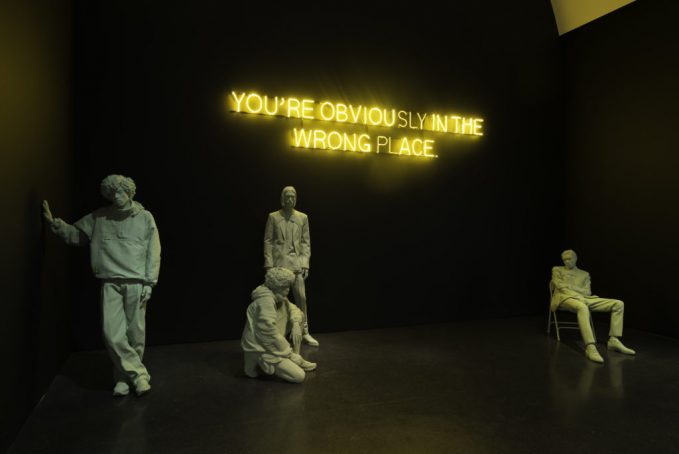 I’ve always been sceptical of Virgil Abloh. I “get” his work but it’s not for me and it’s not a coincidence that his artistic ascension coincided with Kanye’s, arguably his biggest collaborator.

So when I read Rashayla Marie Brown’s review of Abloh’s “Figures of Speech” exhibition, I felt vindicated. And Brown was more eloquent than I would have been.

Besides the press in the New York Times about Abloh’s meteoric fashion career and a cursory review of the exhibit in Architect’s Newspaper, we have not had any meaningful criticism that contextualizes Abloh’s contributions, how exactly his collaborations developed, and what the actual impact of his design is on issues of racial representation in the art and design fields.

The rest of the review analyses the exhibition and how the forms of black art are nothing more than tropes.

Where Instagram celebrity status has produced a new cultural producer hell-bent on monetizing time and false relationships, Abloh’s in-person engagements are more important than the artwork itself, a conundrum touched upon by the numerous events and sites that occasion the show.

While looking through the photos taken of the exhibit, I felt the same sentiment as Jay Post, a member of Young Chicago Authors when he said: “man, he claimed to be representing us, but instead he just gave us a big ass billboard.” The work fell flat in regard to black presentation. It’s just another ironic work of Abloh art. I’m surprised he didn’t reduce the exhibition to a banner with “BLACK” written on it in Helvetica.

But the final paragraph really cuts deep, like a hot knife through butter.

Abloh’s work complains about White supremacy in fashion and then sell products designed to uphold the financial and material oppression of one group over another through collaborating with companies such as Nike and Louis Vuitton. This is the fashion equivalent of saying you don’t eat Harold’s, while we can see the grease dripping down your chin.