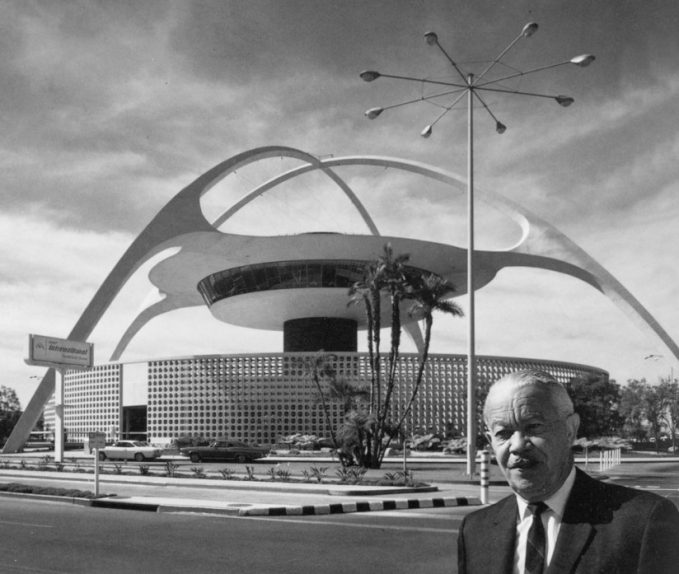 28th Street YMCA, Theme Building at LAX, and Frank Sinatra Residence on Bowmont Drive in Hollywood. What do they all have in common? A Black American architect named Paul Revere Williams.

Born in Los Angeles in 1894, Williams designed a mixture of celebrity homes for the likes of Frank Sinatra and Lucille Ball but also had a hand in designing iconic buildings such as 28th Street YMCA and Theme Building at Los Angeles Airport (LAX), the latter a significant piece of Googie architecture.

His award-winning career started in 1916 when he studied architectural engineering at the University of Southern California. He became a certified architect in 1921 and the first certified African-American architect anywhere west of Mississippi.

Before retiring in 1973, he designed over 2,000 private homes and public buildings, many now listed on the National Register of Historic Places. Here are 5 of them.

While Williams didn’t design the original hotel, he did design the Crescent Wing and the iconic Beverly Hills Hotel signage. The hotel now has a suite named after him, with “a large patio for entertaining and a cool, 1950s vibe”.

This project was the first of many for Williams at the hotel. Throughout the 1940s he designed additions and alterations, updating much of the Mission-style hotel complex. Williams was responsible for creating the hotel’s aesthetics, which have essentially remained unchanged even with new ownership in the 1990s.

Completed in 1968, the First African Methodist Episcopal Church of Los Angeles (also known as First A.M.E. or FAME) was designed in the Late Moderne style with “a zigzag motif used along the roofline and the porch of the front entrance enlivening the simple stucco exterior of the building”. When Williams passed away in 1980, his funeral was held at the church.

Golden State Mutual Life Insurance Company commissioned Williams to design the new building. Built in the Late Moderne style, he used steel and concrete to create a five-story building with a mezzanine, basement, and enough space for GSM’s 300+ employees. The building also had a 400-seat auditorium, a cafeteria, employee lounge and medical department and cost over $1.06m to build (including the cost of the furniture). After a renovation in 2015, a monument was erected in Paul R. Williams’s honour.

The Hollywood Regency-style house covered two stories and contained 32 rooms. According to The Jeffrey Hyland in his book, Legendary Estates of Beverly Hills, it was a departure from Williams’s previous styles at the time:

“He started with the traditional English Georgian style and then gave the residence a thoroughly modernist spirit, creating a residence that was both traditional and contemporary.”

And last but not least is The Theme Building, a Googie structure housed at the Los Angeles International Airport. Williams was part of a team of architects who turned the design into a Space Age reality including William Pereira and Charles Luckman of Pereira & Luckman, and Welton Becket.

The secret to the building’s iconic “crossed” arches lies in an illusion. What appears to be a single construction is, in fact, a combination of four 15 foot-long concrete legs reinforced by steel. The Theme Building was a cultural crossover between pop culture, architecture, and a growing interest in the space age. In 1993, The City of Los Angeles designated the interior and exterior as a historic-cultural monument.

For more on Paul R. Williams’s incredible career, check out 99% Invisible’s episode on The Architect of Hollywood.