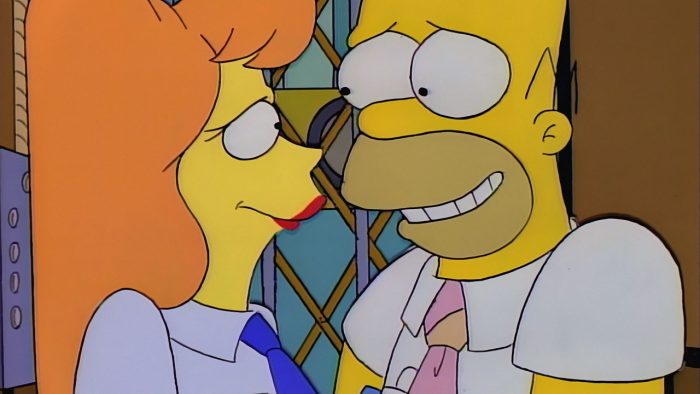 It comprised of 4 members: Jacques, Princess Kashmir, Lurlene Lumpkin, and Mindy Simmons. The reason for the name is simple: each person had a tête-à-tête with either Marge or Homer Simpson. While three of them lay a strong claim to the name, Mindy’s inclusion is questionable.

The last temptation of Homer

Her first episode, “The Last Temptation of Homer”, starts with Homer’s involvement in a nuclear gas leak. Along with the hiring of an illegal immigrant, Mr Burns is told to hire at least one woman: Mindy Simmons (v0iced by Michelle Pfeiffer). This was after he hired Marge in Season 4 Episode 7, who became the apple of Burns’ eye so if anything, he should have taken Mindy’s place in the Home Wrecker’s team but I digress.

Homer becomes instantly attracted to his new colleague, although he remains in denial, blaming it on a “packet of powdered gravy he found in the parking lot”. Ah, classic Homer. As the episode progresses, the attraction grows between them. He confides in Barney about his troubled feelings and, via a philosophical bar napkin, suggests Homer talk to Mindy and find out they have nothing in common. This only fuels the fire between them as he discovers they both love beer, donuts, and naps at work.

Coming home one day does little to dissuade his emotions. Marge is ill, Bart looks like a goofy nerd with big boots and greasy hair, and Lisa manages to burn fish sticks whilst they remain frozen inside (did she blow torch them?). That all makes perfect sense. Colonel Klink from Hogan’s Heroes comes in the form of Homer’s guardian angel to show him what life would be like if Homer chose Mindy instead of Marge. While Homer appears to be rich and happy, it’s suggested that Marge becomes president (like Lisa in another future alternate reality).

The episode nears its climax ahem when Homer and Mindy are chosen to represent the plant at an energy conference in Capital City – The Windy Apple. Even the hotel porter gets in on the innuendos, to which Homer stops him immediately. They win a three-course dinner at the sexiest restaurant in town. A fortune cookie suggests Homer give in to his temptation and they both go back to the hotel. Homer finally addresses the elephant in the room (which isn’t actually an elephant as this isn’t Family Guy) and admits his feelings. Mindy says the decision is up to him.

Did Homer cheat on Marge with Mindy?

In an ambiguous ending, the scene fades to one with Marge in the room with Homer, in the same red dress. She finds a turkey behind the bed, the lights go out, he sings, the hotel porter finds his way in and gets a black eye for his troubles. The end.

Now, between that synopsis and watching the episode in full, I don’t think Mindy did anything wrong. The idea of a homewrecker is bias towards the person outside the proverbial home. 99% of the time, it’s a woman and sexism reigns supreme in a lack of reproach for the adulterous man. Earlier, I suggested the ending to the episode was ambiguous because Homer and Mindy kiss then Marge appears in the same dress as Mindy. Was Marge there or did he imagine Mindy as Marge to make himself feel better? Did they do the deed? These questions remain unanswered.

But between the two of them, Homer is more explicit with his temptations – or at least voicing them. It’s implied that Mindy had expressed hers but other than that, Mindy minds her own business. The episode is set up to pair the couple in situations rather than either of them pursuing an affair.

The misconceptions of Mindy Simmons

Another reason I don’t think Mindy is a homewrecker is that Marge seems to know nothing about what happened. In the case of Jacques, Homer knew what was going on. Marge knew about Lurlene. And Marge caught Homer dancing with Princess Kashmir. But there was no awareness of Mindy from Marge. The closest we got was when Homer rang a crisis hotline, only for Ned Flanders to receive the call and attempt to conference Marge.

Let’s say Homer DID have sex with Mindy that night in Capital City. In a later episode, it’s suggested she was fired after “hitting the bottle”. She later made brief appearances in a couple of other episodes. Homer is notorious for his inability to lie. Marge would have picked up on it. He would have admitted to it and we’d have a follow-up episode on our hands. But we didn’t. Because nothing happened. Homer fancied another woman, and then she left.

Nothing more than a crush

Writer David Mirkin did not like the idea of Mindy being flirtatious. He said the two characters had “so much in common” that it was “not just a physical relationship, but a mental connection as well”. Most importantly, he claimed Mindy wasn’t “a seductress but rather a woman just as nervous as Homer”. This was nothing more than a work crush between two people with similar interests and personalities that built up through “unfortunate” circumstances.

Have I taken this too far? Probably. But if you read this far, you probably didn’t think so.

Oh Mindy, you came and you gave without flaking,
But I sent you Ben-gay,
Oh Andy, you kissed me and stopped me from something,
And I…