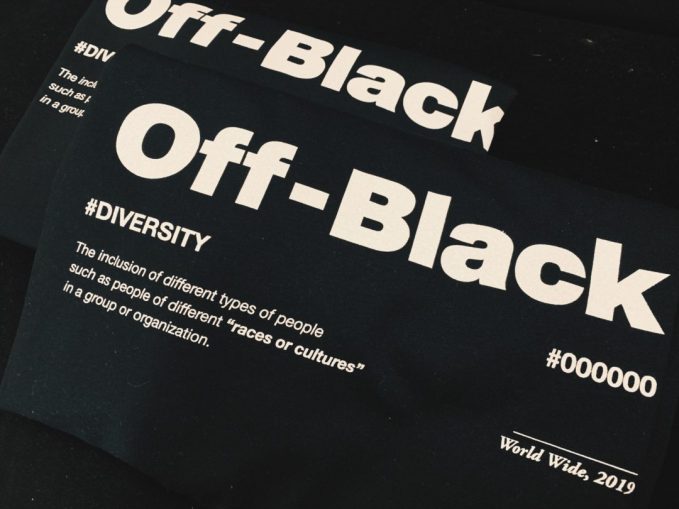 Off-White is a brand that bridges minimalism and maximalism. Its creator Virgil Abloh, known for collaborations with the likes of Kanye West and Takashi Murakami, was appointed artistic director of Louis Vuitton’s menswear collection in 2018 and while this was seen as a breakthrough for modern black art and culture, there have been criticisms.

Off-White or off colour?

One has come from a fellow black designer, Nicky Chulo. The graphic designer questioned Abloh’s lack of diversity in the Off-White brand. Particularly “in the room”. In an interview with Black Enterprise, he discussed his reasons for the stance:

Even if he’s just the “face” of the brand I believe he has a responsibility to speak up on behalf of diversity. I’m not discrediting the talent at Off-White, but knowing how hard I worked, especially as a designer of color, to get to where I am, it hurt a bit […] We need more people of color inside the room.

And his response? A brand of his own.

Chulo created Off-Black as a way to balance the tables and show black inclusion. He said he was “hesitant at first” when launching but felt compelled to go all in, particularly after Abloh had started blocking people on Instagram who sent him messages under the #diversity hashtag.

But Chulo isn’t looking to make a profit from the brand. 100% of proceeds are going to Leaders Amongst Leaders, “a creative program that teaches kids the sky is the limit”.

Currently, there’s only the Off-Black tee available on the site but I’m considering getting one.

You can too by heading to Nicky Chulo’s Teespring site.