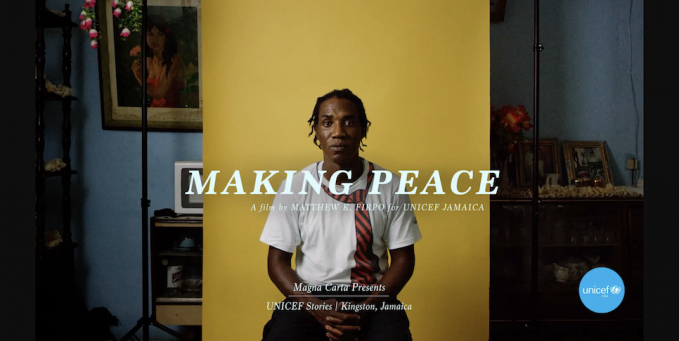 One of my favourite Jamaican proverbs is “if you cannot hear, you must feel” and that’s something many Jamaican live by. Making Peace is a documentary about former gang members who probably followed that unwritten law in their former lives.

They now work as part of Jamaica’s Peace Management Initiative, a UNICEF-support non-profit aiming to end gang violence in the country. The “Violence Interrupters” as they’re known, work in some of the most dangerous neighbourhoods in Jamaica and have their own stories to tell.

Many of them started out in child gangs and spent varying time in prison and saw friends and family die. Dave Sewell is a PMI Liaison officer and got involved in crime at 17. He went onto spend 20 years in prison with 9 of them on death row. He now says he’d “rather die than go back to prison”.

The film was shot on location in Montego Bay, which may surprise those who think the area is a paradise for white tourists looking to “escape” their lives elsewhere. Jamaica has one of the highest murder rates in the world, with Montego Bay and Kingston amongst the worst areas on the island.

Making Peace is the briefest glimpse into the lives of those involved in crime in Jamaica. The perpetrators were given a second chance but their victims and many more aren’t so lucky.