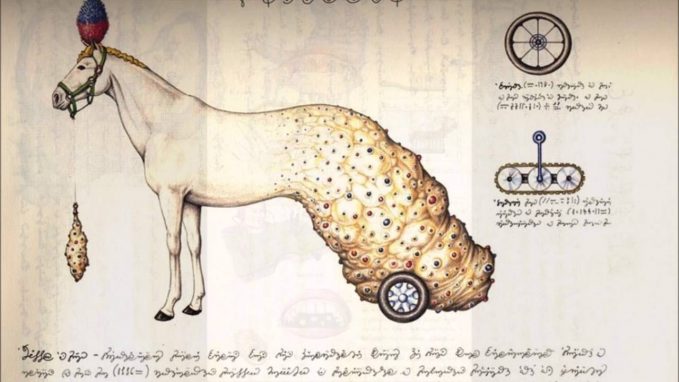 There are plenty of weird and indecipherable texts in history. But one of the most curious texts in recent times is the Codex Seraphinianus. Published in 1981, the codex was written by Italian artist, architect and industrial designer Luigi Serafini over a two-year period between 1976 and 1978.

But what’s inside the Codex Seraphinianus?

To put it crudely, it’s a made-up encyclopedia. Codex Seraphinianus depicts an imaginary world with a cypher and a host of different topics including nature, clothing, and architecture. The illustrations in the book were surreal to say the least. They included:

The point of the codex is to stretch the realms of the imagination but it’s incomprehensible. The cypher is but none of the text has any meaning. And that was the point.

At the end of the day [it’s] similar to the Rorschach inkblot test. You see what you want to see. You might think it’s speaking to you, but it’s just your imagination.

Luigi Serafini, author and illustrator of the Codex Seraphinianus

Where can you buy a copy?

It was originally published in Italy but it made it to a few other countries. The original edition is still super rare but a newer edition came out in 2013, selling out its 3,000 pre-ordered copies.

You can buy a copy of Codex Seraphinianus from Amazon. A hard copy is about £75 if you have deep pockets for surrealism.