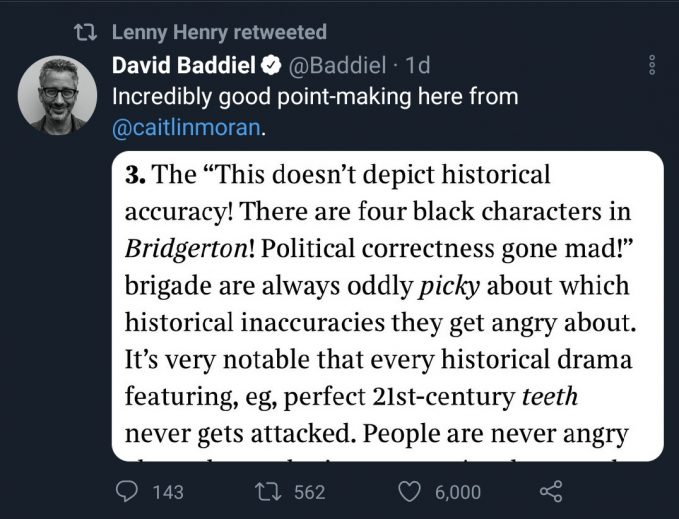 Earlier today, I noticed a Lenny Henry tweet on my timeline. I went onto his profile just to see what he was up to and came across the above tweet.

On the surface, it looks like a comedian/writer/actor retweeting another comedian/writer referencing another writer. But you’d have to know little about David Baddiel or Caitlin Moran to take this on face value and not see what’s wrong with it.

Caitlin Moran, when once asked if she addressed the “complete and utter lack of people of colour in girls” in her interview with Girls creator Lena Dunham on Twitter, she replied “Nope. I literally couldn’t give a shit about it.” There’s a more measured critique of the situation by Bim Adewunmi but it caused a shitstorm and many of Moran’s colleagues came out to defend her in the name of white feminism.

In the 90s, David Baddiel did Blackface to portray Jason Lee, a footballer who played for Nottingham Forest at the time. Lee discussed the incident in 2018:

“If I did there’d be no animosity, but I’d ask them if they realised the significance of what they were doing.

“It was, looking back, a form of bullying. I work in equalities now, and it can affect different people in different ways.

“I don’t think people appreciate the possible harm it can cause. Not everyone has the make-up to deal with that, and they shouldn’t have to.

“With me, there was always something – if it wasn’t my hair, it was the colour of my skin or my height, and it made me resilient.

“What did they expect me to do? Give up my career? I was always going to continue and I played until I was 40 – I have to remind people of that.”

To then see the pair in agreement that people cherrypick the historical inaccuracies in period dramas—particularly the Black people in Bridgerton—is peak hypocrisy. Now Moran “gives a shit”!

It’d be nice if they’d become better people after their behaviour but I don’t think they have. And then to see Lenny Henry retweet it just rubbed me up the wrong way.

See also: The gentrification of BLM and the semiotics and myths around All Lives Matter and BLM.