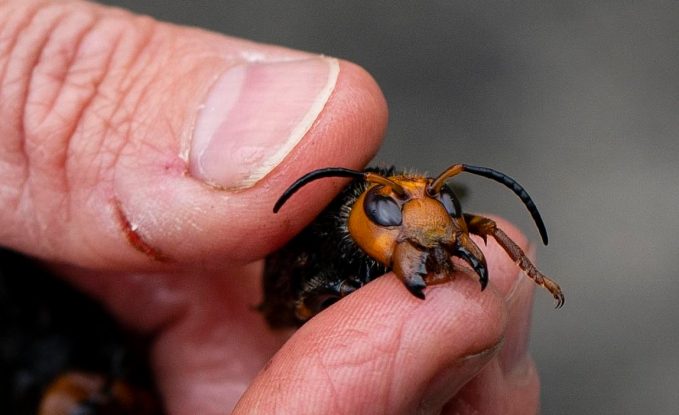 If 2020 wasn’t enough of a hell year with the COVID-19 pandemic and major resurgence of the Black Lives Matter movement, there are now murder hornets. But what the hell are they?

The Asian giant hornet is the world’s largest hornet wasp, native to East, South and Mainland Southeast Asia, and parts of Russia. Unfortunately for people in the Pacific Northwest of North America, some of them made their way across with four sightings this year.

They live in mountains and forests, away from high altitudes and eat on larger insects, tree sap, and honey from honey bees.

A hornet by any other name

The name “murder hornet” is a relatively new invention. In Korea, it is called 장수말벌 or general officer hornet, in China the “giant tiger head bee”, in Japan, the ōsuzumebachi or “giant sparrow bee”. But in 2008, Japanese media outlets gave it a more sinister name – satsujin suzumebachi or “murder hornet”. 12 years later, a NYT reporter picked up the name and the rest is history.

In April, Washington authorities told the public to be on the lookout for any Asian giant hornets. The name wasn’t for show. If they started growing in numbers, they had the potential to destroy bee colonies in the US and would be near impossible to get rid of.

“This is our window to keep it from establishing. If we can’t do it in the next couple of years, it probably can’t be done.”

Chris Looney, an entomologist at the Washington State Department of Agriculture

Besides their invasive nature, they also pack a mean sting. The hornets deliver venom that contains a neurotoxin called mandaratoxin through their quarter-inch stinger. One might not kill but multiple certainly will. Jun-ichi Takahashi, a researcher at Kyoto Sangyo University in Japan, bore the brunt of it when he got stung.

“The next day, his legs were aching, as if he had the flu. Of the thousands of times he has been stung in his lifetime of work, he said, the Asian giant hornet stings were the most painful.”

Quote from The New York Times

How to kill a murder hornet

There are ways to reduce numbers of Asian giant hornets if you act quickly and stop them spreading. The following methods were created in 1973 from “A Bionomic Sketch of the Giant Hornet, Vespa mandarinia, a Serious Pest for Japanese Apiculture (With 12 Text-figures and 5 Tables)”:

Animal lovers, look away now. You can flatten murder hornets with “wooden sticks with flat heads”. It’s very much a whack-a-mole approach so not the most effective or efficient.

Getting them at the source by destroying their nests with fires or poison can kill the colonies. This works well… if you can find the nests. Those underground are difficult to locate but the most common way is to bait them with meat, usually frog or fish.

3. Trap them with bait

Simply place the bait traps in the apiaries. The baits use a jelly or sugar solution mixed with vinegar or some kind of intoxicant.

After the bait, they are then poisoned with a toxin called malathion. If successful, it should kill them within 24 hours.

The traps are inefficient as some hornets can escape past them but attaching them to the front of their hives can work. How well they work depends on how effective they are at actually trapping hornets and letting the innocent bees get through unscathed.

Things like wire, weeds, and fishing nets limit the hornets’ ability to escape but with the right protective screen, honey bees can make it through. But hornets are smart and cotton on to the tactic so this works better with traps rather than on their own.

Hope in the hive

There is light at the end of the tunnel. Washington State Department of Agriculture claim to have trapped a murder hornet in the state for the first time. They trapped the hornet on 14th July and identified it two weeks later. So it looks like traps worked on this occasion.

WSDA’s next steps are to search for nests using infrared cameras and place additional traps in order to catch live Asian giant hornet specimens. WSDA Pest Program staff will deploy special traps intended to trap hornets but keep them alive. If they catch live hornets, the department will attempt to tag and track them back to their colony. Once located, the agency will eradicate the colony.

We’ll beekeep you updated. And if you have issues with bees, hornets, or wasps in your house, this guide will help you safely remove their nests.

Update: The First Living Asian Giant ‘Murder’ Hornet of 2021 Has Been Found in Washington State