This wouldn’t look out of place in Virginia right now but the video above was taken in 2017 somewhere in the US (if anyone knows, please comment). I’m just surprised the snow wasn’t cleared up as it looks like a busy enough station to warrant it.

As Jago Hazzard explains in the above video, there were several proposed names for the Victoria Line on the London Underground and the best one was the Viking Line. But it had nothing to do with the seafaring people of 8th century Scandinavia—it was a portmanteau of Victoria + King‘s Cross as the line went through both stations.

[…] King’s Cross and Victoria was also played with neither of these really sounded right. But wait a second… King Vic… Vic King… Viking! Brilliant! That’s the toughest name ever given to a tube line but, no, not quite what they were looking for. 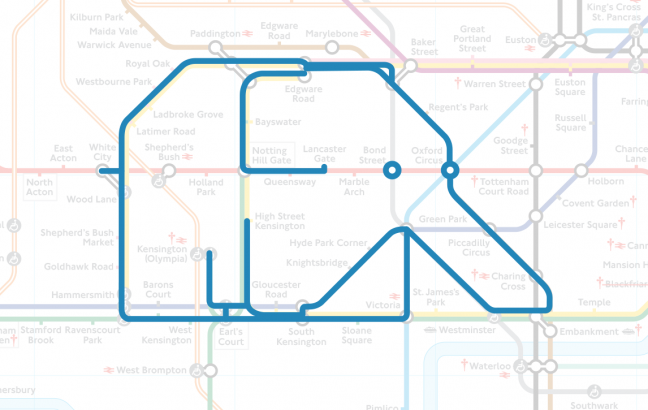 A really cool site I found while I was digging through Kottke.org’s archives.

Animal’s on the Underground’s backstory:

The animals were discovered by London-based designer, Paul Middlewick in 1988. They’re created using only the lines, stations and junctions of underground railway maps. Paul first spotted the elephant while he was staring at the world famous London Underground map during his daily journey home from work.

The more he looked, the more animals he found and the elephant was quickly joined by many other cute animals including a bat, a cat, a polar bear, several dogs and even a bottlenose whale.

But over time, people have discovered animals on other underground transport systems including the Moscow Metro, the New York Subway, and the Paris Metro.

You can buy a desk jotter and a pack of 3 notebooks from the site to help maintain the site as well as donating to them directly via PayPal.

Sadly, no hippos have been found yet. Back in the day, there was a train journey that had no barriers at either station. My home station eventually changed that but I always wondered what journeys you could make with the potential to just walk right on through without a ticket (I do not endorse this btw).

Who is Geoff Marshall?

Geoff Marshall is a TfL enthusiast and created a page on his website dedicated to London Underground facts and figures. It’s particularly helpful for disabled people as not all stations have escalators or lifts. Also interesting to see how many stations are so close together in terms of journey time. Leicester Square to Covent Garden, for example, takes less than 40 seconds on average.